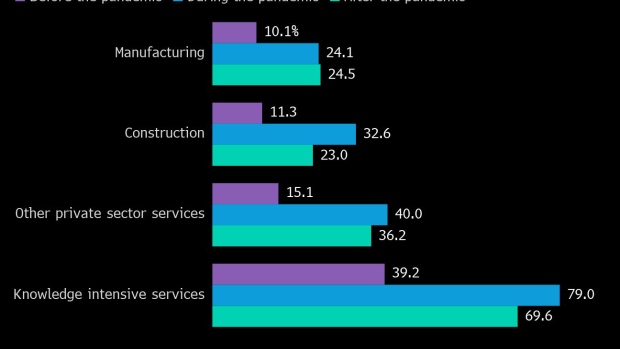 A woman works at a desktop computer alongside an Apple Inc. laptop in a home office in this arranged photograph taken in Bern, Switzerland, on Saturday, Aug. 22, 2020. The biggest Wall Street firms are navigating how and when to bring employees safely back to office buildings in global financial hubs, after lockdowns to address the Covid-19 pandemic forced them to do their jobs remotely for months. Photographer: Stefan Wermuth/Bloomberg , Bloomberg

Office workers probably won’t return to their desks full-time as companies learned to live with flexible arrangements during the coronavirus pandemic, according to European Central Bank President Christine Lagarde.

“We’re heading toward a hybrid movement, where part of the week will be spent in the office so that people can meet, can see each other, can hold regular meetings and have face-to-face contact,” she said on “The David Rubenstein Show: Peer-to-Peer Conversations” on Bloomberg Television. “But the rest of the week will likely be working from home.”

While the exact design of these new arrangements still needs to be determined, “people have learned during the pandemic, and those learnings will be bottled in and used for the future way of working,” Lagarde said.

Major corporations have been forced to delay returns to the office after the delta variant of the coronavirus caused infections to rise. While the City of London is seeing more people return to their desks, some banks are also offering flexible arrangements as employees seek a better balance between work and their personal lives.

Lagarde acknowledged that large parts of the workforce, including hospital staff, construction workers and people working in shops, don’t have the “luxury of choice.” As for the ECB, remote working remains the default option “probably until the end of January, and then we will see,” she said.