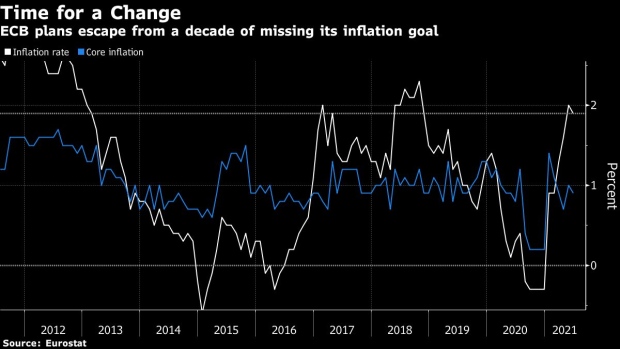 (Bloomberg) -- European Central Bank President Christine Lagarde told investors to prepare for new guidance on monetary stimulus in 10 days, and signaled that fresh measures might be brought in next year to support the euro-area economy after the current emergency bond program ends.

Speaking to Bloomberg Television days after the ECB raised its inflation goal to 2% and acknowledged it may overshoot the target, Lagarde said the July 22 Governing Council session -- previously expected to be relatively uneventful -- will now have “some interesting variations and changes.”

“It’s going to be an important meeting,” she said on Sunday in Venice, after a meeting of Group of 20 finance ministers and central bankers. “Given the persistence that we need to demonstrate to deliver on our commitment, forward guidance will certainly be revisited.”

The unexpectedly early conclusion of the ECB’s strategy review last week is immediately feeding into speculation over the central bank’s plans as the euro-zone economy starts to recover from the pandemic. The review also introduced climate-change considerations into policy, and officials said they’ll start taking account of the cost of owner-occupied housing.

Lagarde said she expects the ECB’s current 1.85 trillion-euro ($2.2 trillion) bond-buying plan to run “at least” until March 2022. That could then be followed by a “transition into a new format,” she said, without elaborating.

Still, she dismissed the need to discuss when emergency stimulus might be wound down, saying she’s only “guardedly optimistic” about the recovery because the delta variant of the coronavirus poses a threat to efforts to resume normal life. While inflation will pick up this year, the central bank expects that to be temporary.

“We need to be very flexible and not start creating the anticipation that the exit is in the next few weeks, months,” Lagarde said.

The approach sets the ECB apart from some of the world’s biggest central banks. U.S. Federal Reserve officials are already discussing when to start tapering their stimulus program as growth and inflation accelerate.

A growing chorus of economists also expects the the Bank of England to raise interest rates as early as next year.

The ECB’s 25-member Governing Council agreed in June to continue running emergency bond purchases at an elevated pace this quarter, though the account of the meeting showed diverging views. Some governors have also publicly said they don’t expect it to be extended past March.

Lagarde said the immediate task is to review the parts of the ECB’s guidance on future interest rates and asset purchases that are tied to the previous inflation goal of “below, but close to, 2%.” The Governing Council chose not to address those changes last week.

She also agreed that the new inflation target “might take a little longer” to reach, but said the more important issue is “the acceptance and the tolerance” that a transitory and moderate inflation overshoot may be needed as part of the commitment to restoring price stability.