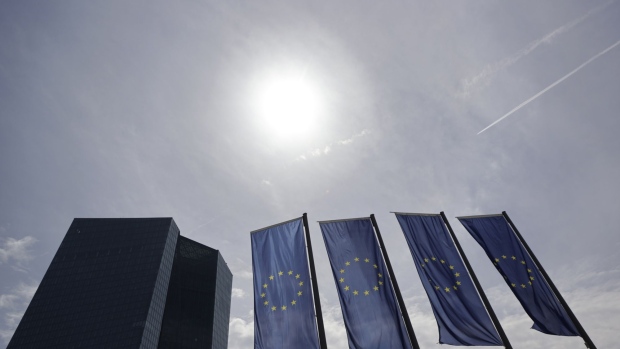 Flags of the European Union (EU) outside the headquarters of the European Central Bank (ECB) in Frankfurt, Germany, on Monday, May 23, 2022. While ECB policy makers have increasingly coalesced around the prospect of a first hike at their July 21 meeting in recent weeks, they have barely mentioned the possibility of a more aggressive half-point move such as the US Federal Reserve delivered this month. Photographer: Alex Kraus/Bloomberg , Bloomberg

(Bloomberg) -- The European Central Bank will probably lift borrowing costs by a half-point this month, according to Governing Council member Gabriel Makhlouf, slowing the pace of its increases after inflation moderated for the first time in 1 1/2 years.

A rise of 50 basis points “is about where we’ll end up,” Makhlouf told reporters Monday in Dublin, saying that if that’s the case, other hikes will follow at subsequent meetings. He himself considers a half-point step to be “the minimum needed” to continue bringing inflation back toward the 2% target from five times that at present.

He didn’t rule out a bigger increment, however, depending on what fresh quarterly economic projections also due this month show.

“We have to be open to policy rates moving into restrictive territory for a period,” the Irish central-bank chief said. “It is premature to be talking about the end-point for policy rates amid the prevailing levels of uncertainty.”

After hikes of 75 basis points at their last two meetings, ECB officials appear to be increasingly open to a smaller move at their final gathering of the year on Dec. 14-15. Makhlouf’s comments chime with those of colleagues including France’s Francois Villeroy de Galhau, who said Sunday that he favors a 50 basis-point step.

With the Federal Reserve also poised to ease off in its battle with surging consumer prices, markets are pricing in an ECB hike of about a half point.

“If we look at futures, of what decisions are expected from the ECB, we have for December a smaller increase than those in the last two meetings,” Portuguese central bank head Mario Centeno said Monday.

But while “everything indicates” that the long-awaited peak for inflation in the 19-member euro area could come this quarter, he said the ECB must remain resolute.

“We have to continue transmitting to markets that the ECB will have no hesitation to fight inflation at the level that we still have today,” Centeno said.

One argument for slowing the pace of rate hikes is the likelihood of a downturn in the euro-zone economy brought on by the war in Ukraine and the spike in energy prices that’s ensued.

Speaking later Monday to Bloomberg TV, Makhlouf said the currency bloc will probably suffer a “technical recession” this quarter and in the first three months of 2023, but that rate increases should persist.

Commenting on the process of undoing the trillions of euros of bond-buying enacted as stimulus in recent years -- a topic for discussion at next week’s ECB meeting -- he said he favors a start date at the end of the first quarter or early in the second.

“My view is that it needs to be done cautiously, carefully and predictably,” Makhlouf said about so-called quantitative tightening. “My preference would be to start slowly and leave room to accelerate” as needed.

--With assistance from Joao Lima, Tom Keene and Jonathan Ferro.