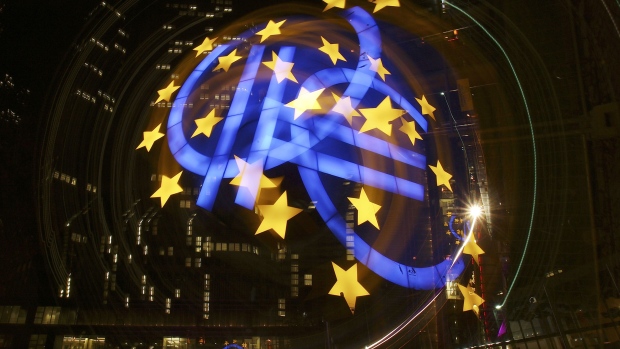 The light trail from a euro sign sculpture is seen in this long-exposure photograph taken outside the European Central Bank's (ECB) headquarters in Frankfurt, Germany, on Tuesday, Oct. 30, 2012. The European Central Bank said euro-area banks increased tightening of credit standards to businesses in the third quarter and expect a similar degree of tightening in the fourth. Photographer: Bloomberg/Bloomberg , Bloomberg via Getty Images

Inflation should fall in 2022 as supply-chain blockages and energy prices recede, though it’s likely to remain at more than 2% in the euro area for the rest of the year, according to European Central Bank Governing Council member Gabriel Makhlouf.

Makhlouf said he doesn’t expect the ECB to raise interest rates in 2022, though policy makers will “have to keep a close eye.” The “big challenge” will be to watch for any second-round effects of inflation, such as wages rising without corresponding increases in productivity, he said in an interview with KCLR’s “The Bottom Line” for broadcast on Saturday.

“If we see risks of those sort of second round effects happening then we will definitely be taking action at the European Central Bank to manage that,” he said.

Euro-area consumer prices rose a record annual rate of 5% in December after a 4.9% increase in November.

As economies recover from the pandemic, monetary policy may tighten compared to the last two or three years, though the pace is “uncertain and to be seen,” Makhlouf said.

While the Bank of England raised interest rates in December and the ECB expects the U.S. Federal Reserve to do so at its next meeting, Europe is “probably on a slightly slower track to see what you might describe as normalization,” Makhlouf said.