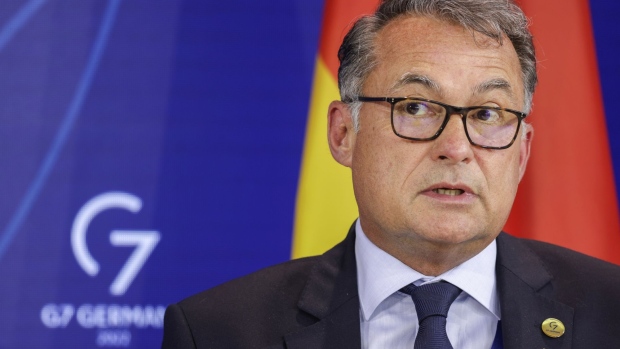 Joachim Nagel, president of the Deutsche Bundesbank, during a news conference at the G-7 meeting of finance ministers and central bank governors in Bonn, Germany, on Friday, May 20, 2022. The Group of Seven unveiled a package worth more than $19 billion in short-term financial aid for Ukraine. , Bloomberg

(Bloomberg) -- The European Central Bank will need to raise borrowing costs again even if that hurts economic growth, according to Bundesbank President Joachim Nagel.

After 125 basis points of interest-rate hikes, “the prospect of further tightening steps was raised, and from my point of view will have to come,” he said in a speech at the University of Lucerne, Switzerland, on Friday.

Nagel is one of the more hawkish members of the ECB Governing Council and has repeatedly highlighted the need to lift borrowing costs again.

The remarks on Friday suggest he’s holding to that view even as the economic outlook becomes increasingly dire, setting the scene for possible tensions on the Governing Council if more dovish members emphasize the risks to expansion.

“I don’t want to hide the fact that the fight against inflation brings burdens with it -- it’s likely to dampen growth temporarily,” he said. “But doing nothing and letting things take their course is not an alternative.”

“Our special measures need to be quickly resolved once they’ve fulfilled their purpose -- that means I’m clearly for a reduction of our balance sheet,” he said. “A phase of such high inflation that we’re forced to hike rates just doesn’t mesh with a huge portfolio from asset purchase programs.”

Nagel also said that it’s too early to discuss where the so-called neutral rate -- the level at which monetary policy neither constricts nor stimulates.

The Bundesbank chief leads an institution that has long vaunted its inflation-fighting credentials. He used the speech to describe the dangers posed by rampant increases in consumer prices.

“Inflation eats away wealth,” he said. “It deprives economic participation because it hits the weakest hardest. It therefore contradicts the claim of ‘prosperity for all’.”

Any decision to activate it must be based on a “comprehensive assessment” of market- and transmission indicators so that any disruption of policy transmission is sufficiently documented, he said.

(Updates with comment on QT starting in sixth paragraph.)