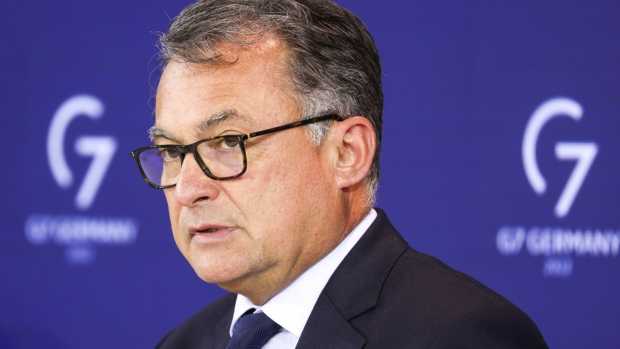 Joachim Nagel, president of the Deutsche Bundesbank, during a news conference at the G-7 meeting of finance ministers and central bank governors in Bonn, Germany, on Friday, May 20, 2022. The Group of Seven unveiled a package worth more than $19 billion in short-term financial aid for Ukraine. , Bloomberg

“If inflation is at 10%, but interest rates are only at 1.25%, then the need for action is clear to me,” Nagel told Sueddeutsche Zeitung in an interview published Friday. “Interest rates must continue to rise -- and significantly.”

The ECB has raised borrowing costs by 125 basis points since officials started hiking rates in July, and another three-quarter point increase may be on the table at the Oct. 27 meeting. At the same time, the economic prospects for the region have grown dire, with a recession looking increasingly likely.

The German economy probably started contracting last quarter, with the slump expected to intensify this quarter and continuing at the start of 2023, Nagel said. Still, it won’t be a “deep downturn,” and output next year may be flat or see a “slight drop,” he said.

The Bundesbank chief, who is among the more hawkish members of ECB Governing Council, expects German inflation to be at or above 6% next year.

While outside forces initially drove inflation, “it’s now affecting a large part of our basket of goods,” Nagel said. “Therefore, we ourselves must be more persistent than inflation and act decisively” to prevent high prices from becoming entrenched, he said. “This requires sufficiently strong and fast reactions. The next meetings of the Governing Council must provide clear signals.”

Asked if ECB hikes may intensify a recession, Nagel said while rate increases may weigh on economic output in the short term, “high inflation is the biggest brake on growth.”