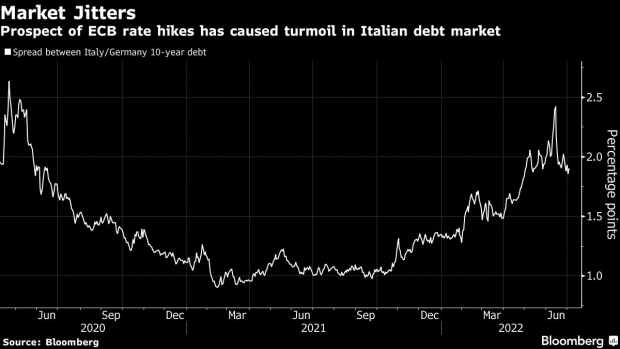 A train travels along a railway bridge near the European Central Bank (ECB) headquarters in Frankfurt, Germany, on Monday, May 23, 2022. While ECB policy makers have increasingly coalesced around the prospect of a first hike at their July 21 meeting in recent weeks, they have barely mentioned the possibility of a more aggressive half-point move such as the US Federal Reserve delivered this month. Photographer: Alex Kraus/Bloomberg , Bloomberg

In his first remarks on the matter since the ECB accelerated work on a crisis instrument, the German policy maker said officials should apply such measures only in “exceptional circumstances and under narrowly defined conditions.”

He also observed that it’s “virtually impossible” to establish whether a widened spread between euro-area members is justified.

“I would thus caution against using monetary-policy instruments to limit risk premia,” he said in a virtual speech to an event in Frankfurt. “One can easily find oneself in dire straits.”

Italy’s 10-year yield premium over its German counterpart -- a key gauge of risk in the region -- remained five basis points higher at 191 basis points after Nagel’s comments, having fallen to a seven-week low on Friday.

With the ECB’s first rate hike approaching, investors are questioning whether surging borrowing costs could force weaker nations into a repeat of last decade’s Europe’s sovereign-debt crisis. After Italian bond yields soared to a multi-year high in June, officials pledged to develop a tool to stem turmoil.

Nagel’s remarks are the most critical so far by a member of the ECB’s Governing Council. He warned that central banks “must not be driven by what are often very short-lived developments in the financial markets,” and that any instrument would need to be “clearly defined.”

At a minimum, he said, a potential tool would require clear justification on three points:

Nagel also insisted that any activation of a tool should be “strictly temporary.” He added that an existing program known as Outright Monetary Transactions -- launched under former ECB President Mario Draghi -- could be drawn on in principle.

If a new instrument were deemed necessary, Nagel reckons three conditions should apply:

Last week, at the ECB’s annual retreat in Sintra, Portugal, numerous officials including President Christine Lagarde urged that a spread-fighting instrument is needed to safeguard efforts to tame inflation. Several, including Latvia’s Martins Kazaks, set similar priorities to Nagel’s, saying that any tool should be treated as a backstop that is only used when it’s urgently needed.

Nagel also warned that the ECB’s inflation outlook will “quite possibly” have to be revised up again at its next forecast round in September, and that “a more sizable interest rate hike would be completely appropriate” absent an improvement. “Restrictive” policy might ultimately be necessary, he added.

“It is important to concentrate all of our efforts on combating this high level of inflation,” he said.

(Updates with markets in fifth paragraph)