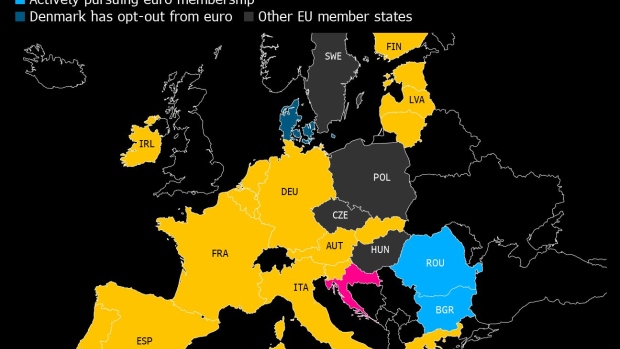 (Bloomberg) -- The European Central Bank’s newest policy maker has plenty to say on the danger of consumer prices running out of control during a war.

Croatian National Bank Governor Boris Vujcic can remember only too well how his country suffered inflation of 1,500% during the 1990s as it fought for independence from the former Yugoslavia. He is adamant that euro-zone policy makers need to act aggressively.

“It’s clear that this is the right way to go,” he said in an interview backing this month’s 75-basis point interest-rate hike by the European Central Bank. “As we learned in Croatia over the last decades, when inflation is high, when it nears double-digit levels, it can become a disease in itself.”

In January, Vujcic will become the 26th member of the ECB’s Governing Council just as his nation adopts the euro. That moment will mark the culmination of more than a decade of leading his central bank to the point where a once war-torn economy is now ready to become part of the world’s biggest currency zone.

The triumph of that accession is bittersweet at a time when another conflict is now raging on the European continent, stoking an energy crisis that’s left inflation uncomfortably high. It’s now above 9% in the euro zone, and 12% in Croatia.

With that backdrop and the mounting danger of a euro-region recession, Vujcic is clear about how the trade-off of policy should transpire, in remarks suggesting he’ll turn out to be an ECB hawk.

“Inflation, if it’s persistently strong, has to be the clearly dominant goal,” he said, speaking in his office in central Zagreb as the capital city’s trams bustle past outside. “Paying much attention to lower growth now, at the expense of fighting inflation, is often luring. But letting inflation become entrenched always has a higher cost than a temporary decline in GDP.”

The kuna has been tied to the euro for more than two decades, but getting a seat at the ECB offers Vujcic, 58, the prospect of more control over his nation’s currency.

That involves “a different set of its own challenges,” he said. “Still, it’s a better position for the country and for monetary policy.”

Such optimism is found in the broader economy, where major items such as cars and real estate are already priced in euros, and people use it for most of their savings. Meanwhile euro-area visitors thronging on Croatia’s Adriatic Sea coast will no longer have to exchange currency, and importers face fewer foreign-exchange risks.

“The person having most regret for the kuna is me because I, not anyone else in the country, sign kuna” banknotes, said Vujcic. “Of course as an economist I know that it’s better for Croatia to adopt the euro, and that’s why I’ve been pushing the project from the start.”

While the nation of 3.9 million people is facing similar challenges to others in the region amid the spiraling cost of energy, growth is outperforming the euro-zone average thanks to a post-pandemic boost for tourism, on which the economy depends for about a fifth of its output.

Even so, the governor is cautious about the outlook, especially at a time of such international tension driven by Russian President Vladimir Putin’s actions in Ukraine.

“It’s difficult to forecast the economy in the short run, even more so in the long run,” said Vujcic, whose second term as governor ends in July 2024. “What I learned in the early days of my career is that for a central banker, be it a monetary-policy maker or a supervisor, if you have to err, it’s usually better to err on the conservative side.”

Such a stance may put him at odds with more dovish ECB officials just as their decision-making gets even harder as growth slows. Vujcic, who likes to reference Bob Dylan and Game of Thrones as part of an easygoing style of explaining policy, reckons he can take the pressure.

“I do not naturally stress out,” he said. “In stressful periods, I feel calm. It’s just that the brain starts to work very, very quickly. And I enjoy it.”