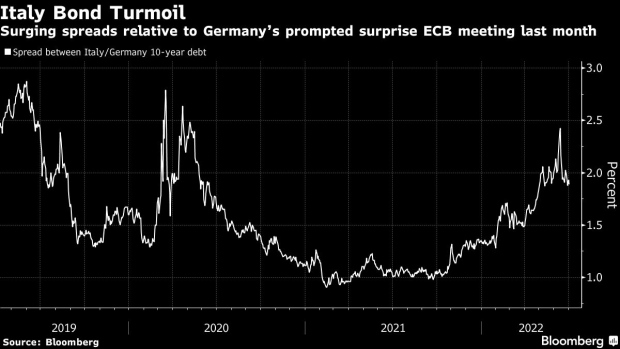 (Bloomberg) -- European Central Bank Executive Board member Fabio Panetta said containing potential turmoil in government-debt markets as interest rates are lifted from record lows is necessary to keep inflation in check and is vital for the whole region.

“Acting against fragmentation, countering any excessive reaction by market yields to the normalization of our monetary policy, isn’t just consistent with our mandate -- it’s necessary,” Panetta said Friday in recorded remarks at the European Parliament. “It’s in the interest of all euro-area countries.”

Dangers stemming from unjustified increases in weaker nations’ borrowing costs include capital outflows and financing conditions that would be “too tight,” he said. Countries seen as more stable would witness the opposite, and ultimately face inflation that would be “too high compared with our intended monetary-policy impulse.”

The ECB is preparing to lift rates for the first time in more than a decade to quell the fastest inflation since the euro was introduced. But after a government-spending binge during the pandemic, investors are fretting about the fallout for public finances -- especially in highly indebted nations like Panetta’s native Italy.

Policy makers are acting on two fronts to keep markets calm: First, flexible reinvestments from the ECB’s 1.7 trillion-euro ($1.8 trillion) pandemic bond portfolio puts about 17 billion euros a month in play to contain yields. A new and probably more potent instrument is also in the works and may be presented at the July 20-21 meeting.

The aim is to shield inflation-fighting efforts from market turbulence. Panetta’s remarks may be aimed at ECB colleagues who blame governments, rather than speculators, for swings in bond yields and are less keen on stepping in to help.

The situation around prices, though, is becoming more urgent. Soaring energy and food costs sent inflation to 8.6% in June -- more than four times the 2% goal -- data showed Friday. That’s boosting calls for the kind of aggressive rate hikes central banks around the world have used to rein in prices.