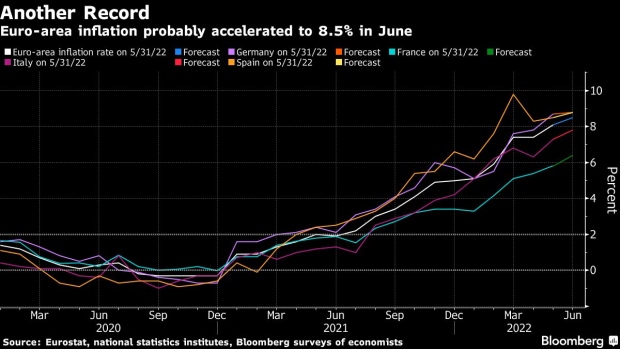 (Bloomberg) -- European Central Bank policy makers gather on a Portuguese hillside on Monday with the sinking feeling that their rush to tackle the inflation shock they failed to forecast risks both a recession and echoes of the euro area’s sovereign debt crisis.

As President Christine Lagarde and colleagues meet in the resort of Sintra for their version of the Federal Reserve’s Jackson Hole conference, they face competing tasks: Cool the fastest consumer-price growth in the euro’s history without delivering an economic downturn or sparking a 2012-style spike in borrowing costs in Italy, the region’s third-largest economy, and other vulnerable states.

Markets are already sounding an alert on what may lie ahead. Italian government bond yields jumped past 4% this month for the first time since 2014 as investors took fright at the ECB’s plan to raise interest rates in July for the first time in a decade.

With that hike locked in, and another set to follow in September, officials are racing to deliver on their promise of a tool to deploy if yields do surge.

“The ECB is in great difficulty,” said Charles Goodhart, a former Bank of England policy maker. “They can’t normalize very rapidly -- loading increases in interest rates up front -- without dealing with the fragmentation issue.”

Inflation now sits four times above the ECB’s 2% target and Lagarde offered a sense of the recent soul-searching last week, telling European lawmakers that officials “misjudged certain factors that had a major impact on inflation.”

The hesitation to lift rates as the Fed and others did was a matter of credibility tied to earlier guidance that’s since become outdated, she said.

While the ECB is now on the brink of reversing subzero rates, the turnaround is being tested by the worst selloff in years in the bonds of indebted euro-area governments. With the bank’s large-scale asset purchases ending Friday, policy makers are trying to design a backstop to help tame yields as their push to normalize monetary policy shifts up a gear.

The Sintra forum, which starts this evening, was traditionally intended as a laid-back event to allow policy makers and academics to mull the bigger picture. Market turmoil has often been lurking nearby, however -- most recently during the Covid-19 crisis.

This week’s retreat will be the first attended in person by Lagarde since she became ECB president in late 2019 and will feature discussions on globalization, labor markets and digital currencies. But central bankers will face more pressing questions on how they intend to preserve the euro area’s integrity while halting inflation.

On Friday, two days after their meeting concludes, data is expected to show consumer prices in the 19-member bloc hit a fresh all-time high in June. Economics predict it will reach 8.5%.

For those worried about another bond crisis, there are reasons to hope one can be avoided: Average interest rates on debt are lower than a decade ago and the average maturity of what is owed is longer with the ECB holding a lot of the outstanding bonds, according to economists at Barclays Plc.

“Surging inflation is causing central banks to tighten policy harder and faster. These price pressures are also building in the euro area, prompting the European Central Bank to set out a road map for withdrawing stimulus, starting in July.”

Still, there are other sources of discomfort at the ECB. Officials will also encounter growing skepticism among the upper echelons of their profession that soaring prices can be contained without severe damage to the economy. Manufacturing output is already declining for the first time in two years.

That poses the risk that they end up over-tightening as their predecessors in 2008 and 2011 are still accused of doing.

Fed Chair Jerome Powell -- who’ll also attend the event -- gave his most explicit acknowledgment yet of the danger of a downturn last week, saying that outcome is possible and that achieving a soft landing is “very challenging.”

For the euro area, the immediate economic risks are possibly even higher than in the US given some lie outside the influence of monetary policy. The spillover from Russia’s invasion of Ukraine has hammered manufacturers, while predictions of a recession in Germany are growing as the Kremlin limits energy supplies.

Commerzbank economist Joerg Kraemer -- who expects a US recession next year and, for now, growth of less than 1% in the euro zone -- says the ECB will probably react “sensitively” if the outlook deteriorates.

“Hanging over all our forecasts like a sword of Damocles is the possibility that Putin will permanently and completely turn off the gas tap,” he said Friday in a report to clients.