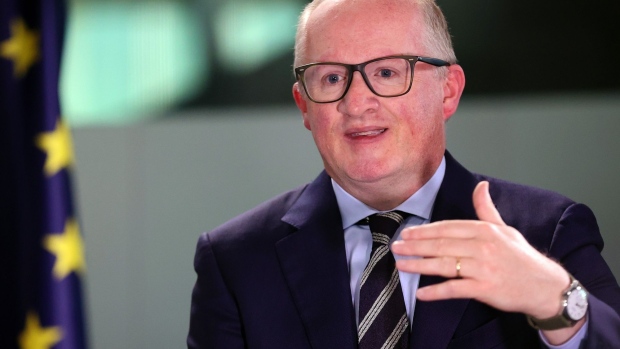 The European Central Bank (ECB) headquarters beside a bridge over the River Main in Frankfurt, Germany, on Thursday, June 17, 2021. European Central Bank Chief Economist Philip Lane signaled that policy makers may not have all the data they need by September to start shifting policy away from the current ultra-loose stance. Photographer: Alex Kraus/Bloomberg , Bloomberg

(Bloomberg) -- European Central Bank officials have some convincing to do about their commitment to rock-bottom interest rates, at a time when investors are growing skeptical.

Financial markets have stubbornly ignored recent warnings from policy makers including Chief Economist Philip Lane that they’re wrong to anticipate a rate hike at the end of next year. The task of persuading people otherwise will fall to President Christine Lagarde as she presents the Governing Council’s latest decision on Thursday.

With inflation spiking, stoked by supply bottlenecks and rising energy, investors are betting that global momentum for withdrawal of monetary stimulus as espoused by the Federal Reserve will soon enough pull the ECB in its wake.

That notion has been fed further by a public debate among officials wondering how to transition from emergency bond purchases, despite the institution’s new low-rate pledge established after Lagarde’s strategy review refocused minds on lackluster price increases.

Back in September, she suggested that financial-market speculation of some eventual tightening in the future was broadly on track. Since then, amid more evidence of inflation, investors started bringing forward expectations for a liftoff in rates. They now see the deposit rate, currently at -0.5%, reaching zero by the end of 2024.

“The market is well ahead of the likely ECB response,” said Giles Gale, head of European rates strategy at NatWest Markets. “We would expect Lagarde to remind the market that they are serious enough about their forward guidance that this path represents a pretty unlikely high-inflation scenario.”

Guiding investors will be a key challenge for Lagarde as she presents the outcome of a decision that has been flagged only as a stepping stone toward a showdown in December between policy makers determining the future of stimulus.

Data on Friday is expected to show consumer-price growth in the 19-nation euro area further approaching 4%, twice what the ECB aims to reach in the medium term. So far, policy makers have insisted that’s largely transitory.

The ECB’s latest forecasts show inflation slowing to 1.5% in 2023 -- not enough to justify higher rates based on policy makers’ latest manual that says forecasts must show price pressures at 2% for some time before such a step can be considered.

Investors initially pared back rate-hike expectations when presented with that guidance in July. Bets on increases in borrowing costs picked up as the economy staged a strong summer recovery, and as price growth broke through 3%.

Even so, Lagarde showed little sign of alarm at the end of September, when markets priced in a 0% deposit rate in four years’ time.

“Our forward guidance has already led to a better alignment of rate expectations with our new inflation target [...] We expect to see further progress toward an even tighter alignment between the expected time of lift-off for our policy rates and the most likely inflation outlook.”

Now that rate-hiking bets have kept surging, it’s unlikely that the president can still be as sanguine. If such a trend continues along with a broader tightening of financial conditions guiding policy decisions, it risks curtailing the ECB’s room to gradually phase out crisis support and move to more standard ways of supporting the economy.

“It makes sense for the ECB to be focusing its discussion on the balance sheet, rather than rates at this stage,” said Mohammed Kazmi, a portfolio manager at Union Bancaire Privee.

That focus might have distracted the ECB, said Michael Leister, head of rates strategy at Commerzbank AG.

“The rate hike repricing was very, very swift,” he said. “You can excuse them for dealing with other issues first.”

While Lagarde hasn’t remarked on the move, some of her colleagues are on edge. Greek Governing Council member Yannis Stournaras said Oct. 7 that rate bets “are not in accordance with our forward guidance.” Italy’s Ignazio Visco warned on Oct. 18 that “perhaps the market has been a bit too hectic.”

Lane, a member of the ECB Executive Board, expressed concern just last week.

Even if Lagarde and her colleagues manage to change perceptions this week, their policy will remain vulnerable to investor preoccupations guided by surging global prices.