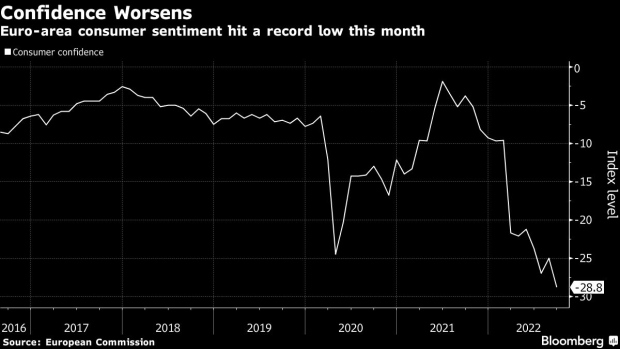 Isabel Schnabel, executive board member of the European Central Bank (ECB), speaks at the ECB and its Watchers conference in Frankfurt, Germany, on Thursday, March 17, 2022. The European Central Bank warned that euro-zone inflation could reach 7.1% this year under a severe scenario that seeks to capture the consequences of a worsening backdrop from Russia's war in Ukraine. Photographer: Alex Kraus/Bloomberg , Bloomberg

(Bloomberg) -- Upward pressure on consumer pressures has spread from energy to engulf the whole euro-zone economy, according to European Central Bank Executive Board member Isabel Schnabel.

“What we are seeing is that the inflationary pressures have become much more broad-based,” Schnabel said Thursday evening in Luxembourg. “They have somehow crept into all parts of the economy.”

Soaring consumer prices have prompted Schnabel and her colleagues to lift interest rates more rapidly than many expected at their last two meetings -- despite a worsening economic backdrop.

Officials are walking what Vice President Luis de Guindos on Wednesday called a “fine line” in trying to balance the assault on prices with deteriorating growth prospects. Deutsche Bank this week downgraded the euro area’s outlook, seeing a much deeper recession than previously after Russia slashed energy supplies in retaliation for sanctions over its war in Ukraine.

Coming from a very low level of interest rates, “at the moment, we are not in a situation where the normalization of monetary policy harms the economy,” Schnabel said. “It’s more like we have to remove the accommodation that we still have in the system.”

In an interview with German website t-online published earlier Thursday, she said inflation -- already the fastest since the euro was introduced and almost five times the ECB’s 2% target -- may not have peaked.

The comments come hot on the heels of the latest hike by the Federal Reserve, which raised borrowing costs by 75 basis points for a third straight meeting on Wednesday. Money markets show investors betting on the ECB to lift rates to 3% by May from 0.75% at present.

With five weeks still to go, policy makers at the Frankfurt-based institution are reluctant to reveal their preference for October’s increase.

“I’m expecting that the ECB’s Governing Council will continue to increase interest rates at its next meeting,” Schnabel told t-online. “What I cannot say is how big this hike will be or at what level we will stop increasing rates. We are deciding meeting by meeting, based on an assessment of all the economic and inflation data.”