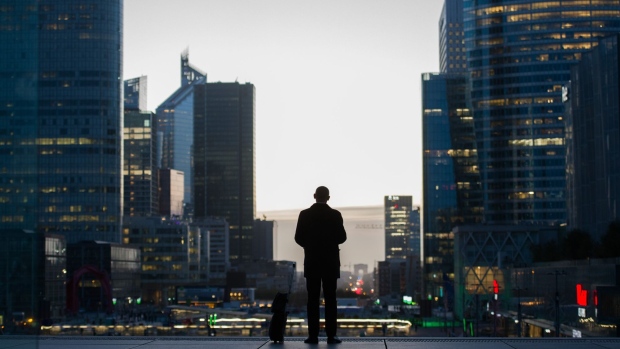 An office worker at sunrise in the La Defense financial district in Paris, France, on Wednesday, Nov. 2, 2022. In October, the Bank of France said the economic downturn implied in the bottom of its forecast range would only be "limited and temporary." , Bloomberg

(Bloomberg) -- Bank of France Governor Francois Villeroy de Galhau urged commercial banks to exercise caution on share buybacks -- raising the pressure on lenders as they prepare their shareholder-payout plans for 2022.

Addressing a conference Monday in Paris, Villeroy reiterated that while French banks remain solid and should benefit from rising interest rates, heightened volatility and slower economy growth in Europe should keep them vigilant on capital projections.

“Nothing appears to justify today a general restriction on dividend distribution, like was temporarily the case in 2020,” said Villeroy, who’s also a member of the European Central Bank’s Governing Council.

“Nevertheless, caution remains necessary for all in terms of future capital trajectories, and in particular regarding share buybacks which are submitted to an explicit authorization from the supervisor,” he said.

The comments reinforce the message this month from ECB’s top bank oversight official, Andrea Enria, who said supervisors would push lenders to ensure they’re maintaining sufficient financial reserves. Some expect only minor hits from the energy crisis and a likely recession, even as the ECB warns of loan losses as soaring natural gas and power prices make it harder for consumers and companies to service debts.

Bracing for a downturn, France announced in September that it would lift its lenders’ countercyclical buffer to 1% of banks’ risk-weighted assets. Villeroy said Monday that that level may be maintained next year.

“In 2023, the economic slowdown calls for a balanced macro-prudential policy,” he said. “It needs to be protective, without being pro-cyclical nor restrictive, in the context of monetary-policy tightening.”

“We can’t claim to know where the next crisis would come from,” Villeroy said. “It is high time for us to advance in the strengthening our regulatory framework of non-bank financial institutions, in all its dimensions, whether micro or macro-prudential.”