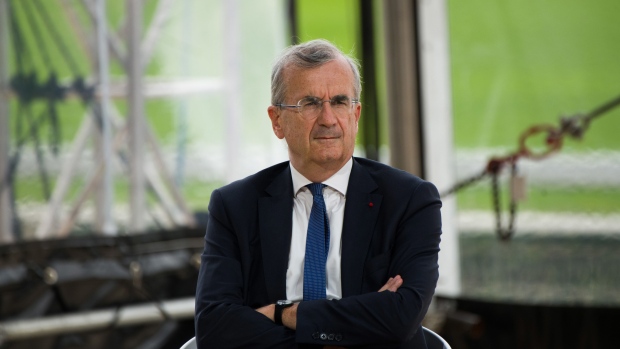 Francois Villeroy de Galhau, governor of the Bank of France, during the Mouvement des entreprises de France (MEDEF) business conference at Longchamp racecourse in Paris, France, on Thursday, Aug. 19, 2021. French economic policy should shift to address the challenges of the climate transition for industry and employment, and focus less on the Covid-19 pandemic, the chief economist of the country’s treasury said. , Bloomberg

(Bloomberg) -- European Central Bank Governing Council member Francois Villeroy de Galhau said policy makers should take into account more favorable financing conditions in the region when they decide on the pace of emergency bond-buying next week, hinting a slowdown may be in the cards.

Any changes in the program dubbed PEPP would not amount to tapering like that announced by U.S. Federal Reserve Chair Jerome Powell on Friday, according to Villeroy, who is also the governor of the Bank of France.

Yet the ECB should be coherent with the principle that has led it to purchase assets at a significantly higher pace since March to ensure conditions supported a recovery in the euro area.

“On monthly volumes, we are looking at the favorable financing conditions, and we should underline that they are more favorable than at our June meeting,” Villeroy said on BFM Business radio. “We have to decide the monthly volumes for the fourth quarter.”

Villeroy’s comments come ahead of an ECB meeting next week at which policy makers will have to decide how much monetary stimulus the region needs over the remaining months of 2021. The central bank has purchased debt at an average pace of 80 billion euros ($94.4 billion) a month and has about half a trillion euros left to spend under its 1.85 trillion-euro emergency program.

Villeroy said the future of the ECB’s regular bond-buying program will probably not be a topic for the upcoming meeting.

All About That Pace

The French central banker also stressed that the U.S. and the euro area are not moving at the same “tempo,” neither in terms of recovery nor deciding on when to normalize policy. Inflation trends differ, he said, adding that there’s no risk of overheating in Europe despite temporary spikes in the coming months.

Still, Villeroy indicated that the ECB may follow the Fed in decoupling decisions on rates and asset purchases. At their July meeting, some policy makers said the ECB should loosen its commitment to continue bond buying under the APP until shortly before it begins raising rates.

“Powell marked a disconnect in time on decisions on purchases and later on the rates, and he even suggested much later,” Villeroy said. “I think this disconnection probably applies on both sides of the Atlantic, without stating figures or calendar.”