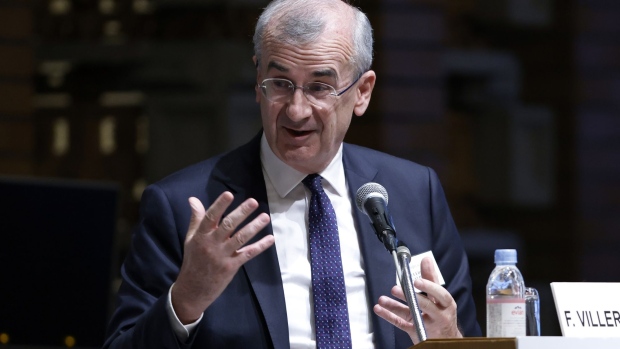 Francois Villeroy de Galhau, governor of the Bank of France, speaks at the Paris Europlace International Financial Forum in Tokyo, Japan, on Tuesday, Nov. 15, 2022. The 25th annual forum in Japan features French, European and Japanese financial and business leaders as well as policymakers, including representatives from government and regulatory bodies. , Bloomberg

(Bloomberg) -- The European Central Bank should raise interest rates by 50 basis points this month to help tame surging consumer prices, said Governing Council member Francois Villeroy de Galhau, who added that inflation will peak during the first half of 2023.

“I think it’s desirable to bring rates to 2%, so a rise of 0.5 or 50 basis points,” the governor of the Bank of France said Sunday in an interview on LCI television.

The ECB is due to decide on interest rates on Dec. 15, and markets are leaning toward a 50 basis-point increase after earlier pointing to a possible third consecutive 75 basis-point hike.

Using a football analogy, Villeroy said an increase to 2% will mark the end of the first half to reach a normalization of rates in a game that has reached a turning point. He reiterated his expectation that the ECB may shift to a slower pace of rate hikes next year.

“In the second half of the match, rates will continue to rise but I can’t say where this will stop,” he said, adding that increases will become more flexible and at a slower pace.

This second half of the inflation fight will be longer and it could take another two to three years to get prices fully under control, he said.

The ECB is determined to curb price gains and should get inflation back to its 2% target by 2024 or 2025, Villeroy said.

“This isn’t only a prediction, this is a commitment,” he said.

The interview was the second intervention for the French policy maker during the day and followed an earlier joint television interview on German channel Phoenix with Bundesbank President Joachim Nagel.

Villeroy said on LCI he couldn’t rule out a recession for France and the euro zone, but that if it happened, it would be limited and temporary.

“We can say today that France and Europe will dodge a hard landing,” he said. “We see a slowdown today, not a collapse of the French and European economies.”

ECB officials are also expected to agree on Dec. 15 on the modalities for reducing the roughly €5 trillion ($5.3 trillion) in bonds on their balance sheet.

“I think it would be wise to start to reduce in 2023,” Villeroy said, adding that this should begin with the so-called APP holdings in the “first half of the year, clearly but cautiously and progressively.”