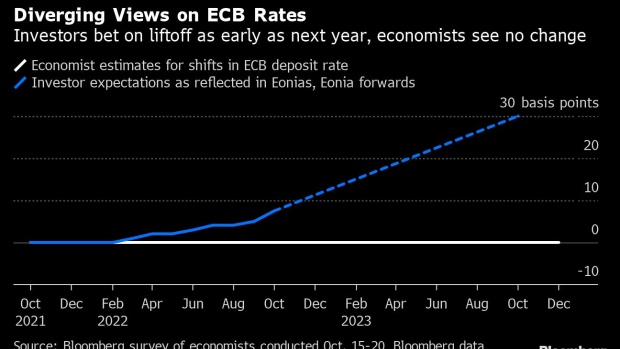 The European Central Bank (ECB) headquarters beside the River Main in Frankfurt, Germany, on Thursday, June 17, 2021. European Central Bank Chief Economist Philip Lane signaled that policy makers may not have all the data they need by September to start shifting policy away from the current ultra-loose stance. , Bloomberg

(Bloomberg) -- The European Central Bank will supercharge its regular bond-buying program before pandemic purchases run out in March, according to economists surveyed by Bloomberg.

Policy makers will increase the pace of their standard tool next year and make it more flexible to be able to better address market stress, respondents said. They also predict the ECB will start phasing out its emergency plan in December, and one in four say it could be followed by a new program.

No policy shifts are expected at next week’s Governing Council meeting.

The ECB is preparing for a major policy overhaul at its final meeting of the year, when new economic projections will give officials a better view on future stimulus needs. Economists predict the central bank will lay out a path then for its pandemic emergency purchase program that won’t exhaust the 1.85 trillion-euro ($2.2 trillion) envelope.

Next Thursday, the focus will be on President Christine Lagarde’s message to investors betting on faster interest-rate increases amid a global surge in inflation and policy tightening by central banks elsewhere. Economists see rates on hold through at least 2023.

“They will be searching for clues about what the ECB intends to do about the PEPP,” said Claus Vistesen of Pantheon Macroeconomics. They’ll also “be looking for evidence of push-back against the clear shift in market expectations, currently pricing in a rate hike by 2023.”

Officials have cautioned that now is not the time to tighten monetary policy. While the current spike in euro-area inflation -- the rate is well above 3% -- and a relaxation of the health crisis may add to arguments for reducing support, price pressures are widely expected to moderate, with supply bottlenecks threatening to damp the recovery.

“The Governing Council will debate how transitory the current spike in inflation will be, but Lagarde should maintain her view that the above-target readings are unlikely to persist. That will allow her to leave open the door to increasing the pace of monthly bond buying through the APP in March when the PEPP expires.”

Recent public comments have offered some flavor of the upcoming debates on future monetary policy.

More conservative Governing Council members such as Estonia’s Madis Muller and Klaas Knot from the Netherlands have expressed some reluctance at preserving the extraordinary flexibility of crisis-era stimulus as conditions improve.

Other, including Italy’s Ignazio Visco, advocate that flexibility of some form should remain. France’s Francois Villeroy de Galhau, meanwhile, prefers having a “contingent option” that could be activated during periods of market turmoil.

Such a tool is already being studied at the ECB, according to people familiar with the matter.

The majority of economists predicts the ECB will commit to spending as much as necessary under its conventional APP program to maintain favorable financing conditions.

Other possible changes include raising the share of bonds that can be bought from each issuer, loosening a rule that allocates purchases according to the size of each economy, and moving away from fixed monthly amounts.

Visco told Bloomberg Television in an interview this week that another option -- increasing the share of debt issued by international institutions in the euro area -- is “something that we may end up doing.”

“The bank will make an explicit statement that APP purchases could be used more flexibly over time and asset class if necessary to ensure that the transmission mechanism of monetary policy is smooth,” said Andrew Kenningham of Capital Economics.

As for actual policy shifts, Kenningham is joining Joerg Angele at Bantleon Bank and many others in being patient.

“The upcoming meeting will be some kind of bridging event,” said Angele. “It has already been made clear that no major decisions will be taken and that the December meeting is the one to watch.”