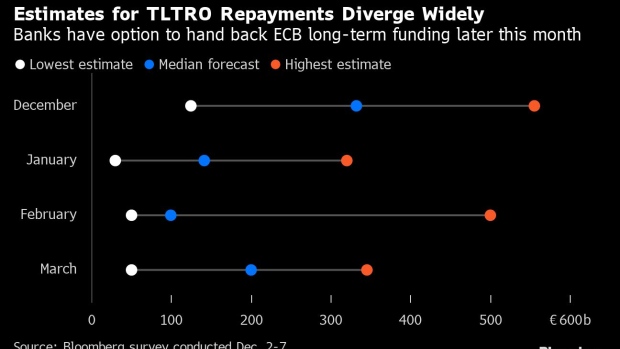 (Bloomberg) -- The European Central Bank will receive a similar repayment of long-term loans from banks this month as it did in November, according to a survey of economists.

Of the 12 respondents providing forecasts for the second such opportunity to return liquidity since new terms were introduced, the median was €333 billion ($350 billion). Like last time, the range of predictions is wide, exceeding €200 billion in either direction.

Such repayments of the so-called TLTRO would echo the €296 billion returned in November. Prior to that, the ECB toughened conditions of the lending program to make it less attractive as it fights record inflation with unprecedented interest-rate hikes.

Friday’s announcement on banks’ plans to repay funds borrowed at the height of the pandemic may hold clues on the timing and pace at which the ECB plans to run down its largest bond portfolio. A big tally might potentially lessen the need for a speedy start to so-called quantitative tightening early next year.

The estimates in the Bloomberg survey anticipate a total of €775 billion returning to the ECB by March. Such forecasts have been shown to be wildly speculative; for example, the amount returned last month was less than half of the median prediction.

According to economists at Barclays, Germany and Austria saw the largest repayments in November, representing about 20% of their respective borrowing. Italian banks only returned some 4%.

That trend will likely continue, Ludovico Sapio and Paola Sabbione wrote in a report published Wednesday.

“Core banks will be more sensitive to regulatory factors at year-end and engage in larger repayments to streamline the size of the balance sheet,” they said. “We continue to expect little repayment from peripheral banks, which we see as notably more sensitive to economic considerations.”

Only €52 billion euros worth of so-called TLTRO loans are expiring this month, with any additional amounts representing early repayments of longer contracts. Banks will need to return some €1.1 trillion by June and another €708 billion by the end of 2024.

There are several incentives for speeding up the process: Loans with shorter residual maturities — particularly those with less than six months to run — no longer qualify for certain regulatory requirements and thus lose their appeal.

Repaying them, on the other hand, frees up collateral that’s been scarce in some pockets of the market and reduces levies tied to the size of banks’ balance sheets.

At the same time, economic uncertainty may encourage some banks to hold on to liquidity buffers since replacing them later would be costly given rates have risen steeply over the past months.

The Governing Council is widely expected to raise rates by another 50 basis points next week, taking the deposit rate to 2%. Policymakers are also planning to outline key principles for QT, before settling on details some time next year.