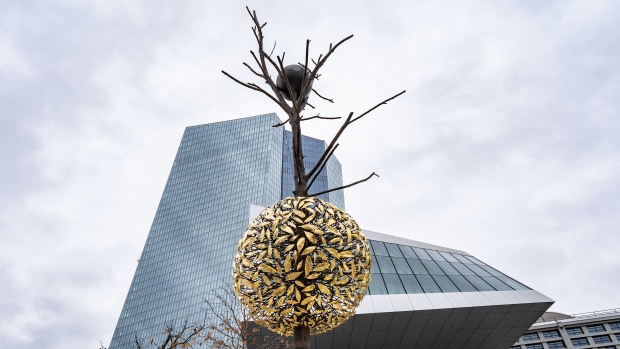 (Bloomberg) -- The European Central Bank nearly halved the pace of bond-buying under its pandemic program last week as many countries across the region observed Easter holidays.

The institution settled net purchases of 10.6 billion euros ($12.6 billion) in the week ended April 2, following amounts of about 20 billion euros in the previous two weeks, according to a statement. Policy makers decided to step up buying at their March meeting as massive U.S. fiscal stimulus drove yields higher, threatening the euro-zone recovery.

With coronavirus infections high, progress on vaccinations slow and many countries tightening restrictions, the ECB has expressed concern that investors have become too optimistic about near-term prospects. Many economists have already revised down their estimates for growth.

The ECB said total holdings under its pandemic program increased to 943.2 billion euros last week. That’s just over half the total envelope of 1.85 trillion euros the institution plans to spend by March next year.