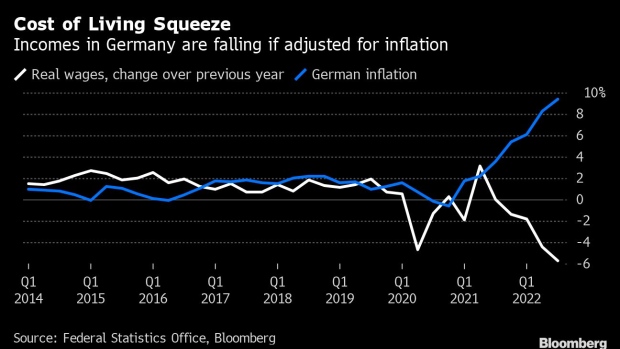 The European Central Bank (ECB) skyscraper headquarters building stands at dawn in Frankfurt, Germany, on Wednesday, July 25, 2018. The ECB president and his colleagues will set policy on Thursday, with analysts predicting the Governing Council will reaffirm that bond purchases will end in December and interest rates could start rising after the summer of 2019. Photographer: Alex Kraus/Bloomberg , Bloomberg

The ECB’s trade union — known as the International and European Public Services Organisation, or IPSO — wants to amend a 4.07% salary increase set to take effect in 2023. It follows a 1.48% hike for 2022 — less than half Germany’s rate of consumer-price gains the previous year.

“We’re not happy” with the proposal, Carlos Bowles, vice president of IPSO, told Bloomberg. “With inflation in Germany and the euro area likely around 8.5% this year, it means a substantial loss in purchasing power.”

If real salaries are lower than the year before, he said, “this is damaging workers morale and also their trust toward the institution.”

The friction comes as ECB officials scan the broader economy for signs of wage growth accelerating — something that could keep unprecedented euro-zone inflation elevated for longer. President Christine Lagarde said last month that pay gains are “picking up,” warning that a wage-price spiral would prove “self-defeating” and hamper the economy’s productive capacity.

Bowles, for his part, points to IMF staff research that quicker nominal-pay growth isn’t “necessarily a sign that a wage-price spiral is taking hold.”

The ECB isn’t the only central bank where staff compensation has grabbed headlines. Employees at its Brazilian counterpart held strikes this year over pay, while meager advances in salaries highlight the challenge that Bank of Japan officials face to revive inflation and the economy.

While wages in Europe are on the rise amid record-low joblessness, workers haven’t been able to fully offset surging living costs. German labor union IG Metall struck a landmark deal with employers that will see their salaries rise by 5.2% next year and 3.3% in 2024, on top of tax-free bonus payments.

The ECB’s staff union has previously sought to link salary increases to consumer prices, though the request was refused and Lagarde said in May that adjustments must be “reasonable.”

“We at least want a negotiation about our salaries, but the ECB isn’t open to that,” he said, adding that the institution is also unwilling to approve non-financial proposals such as additional end-of-year vacation days.

“If a negotiated approach to find a compromise continues to be rejected by the ECB, we will have to consider protest actions early next year,” Bowles said.

An ECB spokesperson declined to comment on the union’s requests, saying the central bank’s process “follows a predefined methodology” and “reflects the wage dynamics of comparator institutions” while applying to “all staff.”