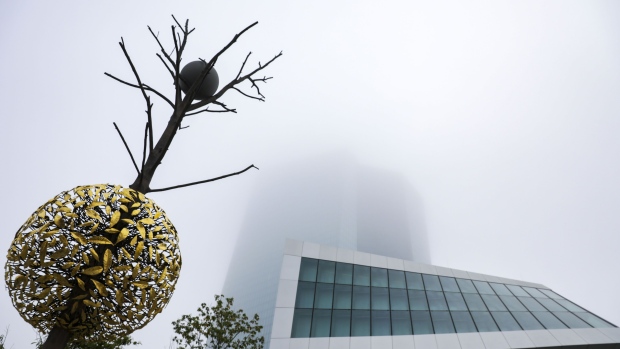 A bronze and granite tree-shaped sculpture entitled Gravity and Growth stands beside the fog shrouded European Central Bank (ECB) headquarters ahead of a farewell ceremony for ECB President Mario Draghi in Frankfurt, Germany, on Monday, Oct. 28, 2019. Christine Lagarde will inherit two gifts when she takes over the presidency of the European Central Bank, both temporary and both from Draghi. , Bloomberg

A European Central Bank researcher has an idea why it’s so hard to predict how consumers will react to economic stimulus. He says people aren’t always up to date with the latest news.

In a paper published on Wednesday, economist Jiri Slacalek notes that “many economic models assume that households use all available information in making decisions,” and those assumptions are “too extreme” for some economists. So he makes adjustments.

His tweaked model assumes households update their expectations for inflation and unemployment only occasionally -- surveys show about a quarter of them do so every three months. The results, in his view, generate predictions that better fit the actual data. They also allow him to draw two conclusions.

Firstly, announcing fiscal stimulus -- as countries such as Germany are increasingly being pressured to do -- isn’t enough to persuade people to spend more. They need to see the money.

Likewise, the promise of future monetary stimulus -- a tool known as forward guidance used by major central banks including the ECB -- can be problematic.

In words that highlight the challenge for policy makers, Slacalek says that “when households have sticky expectations, they do not react much to central-bank announcements, thus providing a possible explanation for the limited effectiveness of forward guidance.”

To contact the reporter on this story: Paul Gordon in Frankfurt at pgordon6@bloomberg.net

To contact the editors responsible for this story: Craig Stirling at cstirling1@bloomberg.net, Fergal O'Brien