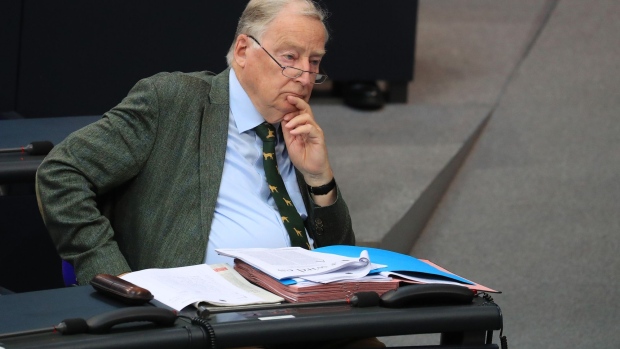 The European Central Bank will be center stage of yet another legal challenge in Germany, this time regarding its emergency response to the coronavirus pandemic.

The rightwing Alternative for Germany party said it will sue parliament and the federal government in the country’s constitutional court in a bid to stop the country’s participation in the ECB’s Pandemic Emergency Purchase Program, which it considers to go beyond the bank’s mandate.

The ECB has failed to adopt limits on the program that applied to earlier bond purchases, and minimum credit ratings for bonds to be purchased, and didn’t observe a binding rule to allocate purchases according to the capital key, the party said in a statement.

The central bank has pledged to conduct emergency purchases worth 1.35 trillion euros ($1.5 trillion) through next June, with the possibility of raising that amount if needed. The program follows the same asset-eligibility rules as previous programs.

”We consider that the Bundestag’s rights have been violated because the federal government -- and the Bundestag itself -- have failed to stop the PEPP program quickly or on time,” the AfD said.

The move comes just over a month after the same court ruled that the ECB is violating European law with its asset-purchase program, which has has led to 2.7 trillion euros of bond-buying since 2015 and remains in effect. The judges said the Bundesbank can no longer participate in the program unless the ECB justifies the pros and cons of its policies within three months. They called on the German government and parliament to ensure this is done, triggering a special committee in the Bundestag to study the matter.

The Governing Council will continue to gauge whether the “size, duration and composition” of the PEPP remain appropriate in light of economic consequences of the pandemic, European Central Bank Vice President Luis de Guindos said last week.

Based on the QE case, which took five years, any ruling on PEPP would likely come only after the end of the coronavirus pandemic.