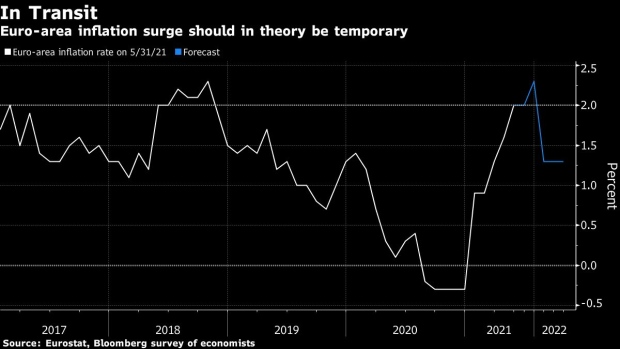 The euro sign sculpture stands outside the former European Central Bank (ECB) headquarters in Frankfurt, Germany, on Monday, Oct. 21, 2019. U.K. Prime Minister Boris Johnson is making a fresh bid to deliver on his promise to take Britain out of the European Union on Oct. 31 amid mounting optimism that he now has the backing to get his deal through Parliament. Photographer: Alex Kraus/Bloomberg , Bloomberg

(Bloomberg) -- European Central Bank officials will decide on Thursday just how much monetary stimulus the euro zone needs as it emerges from coronavirus lockdowns over the summer.

After ramping up their bond-buying program in the second quarter to keep borrowing costs in check, it’s time for officials to settle on a new pace for the months ahead.

Most economists expect them to lock in the current pace for another three months. The Governing Council is unlikely to publicly set a specific target though, forcing investors to read between the lines of the policy statement, new economic forecasts, and President Christine Lagarde’s press conference.

The backdrop is a resurgent economy fueled by higher vaccination rates and falling infections that are reviving European restaurants, shops and beaches. That’s also driving a jump in prices, raising the question of when the ECB should act to keep inflation under control.

The policy decision will be announced at 1:45 p.m. Frankfurt time, and Lagarde will hold her virtual media briefing 45 minutes later.

The key phrase to look out for is whether the ECB expects to buy debt under its Pandemic Emergency Purchase Programme at a “significantly higher pace than during the first months of the year.”

That’s the language it used at the previous meeting, reflecting a March decision when the U.S. recovery threatened to spill over into higher euro-zone bond yields that could damage the fragile economy. Officials decided to revisit the decision at the end of the quarter.

Most economists say they no longer expect a significant reduction in the coming quarter, after policy makers including Lagarde rebuffed the notion that the economy could cope.

Still, thinner liquidity over the summer may result in some slowdown, and the president is expected to play down the significance of that pullback.

Despite the extra bond-buying, yields have risen since March. That’s partly due to expectations that accelerating inflation globally will force central banks to tighten monetary policy. Recent ECB comments have allayed some of those fears, though the spread between German and Italian 10-year debt is still wider than a month ago.

Central bankers almost everywhere say the inflation pickup will be temporary -- that factors such as manufacturing bottlenecks and a jump in energy costs won’t be sustained, and uncertainty over jobs will keep wage growth muted.

Coincidentally, just as Lagarde starts her press conference, the U.S. will publish figures that are expected to show inflation there jumped to 4.7% in May. That’s far above the Federal Reserve’s 2% target, as faster vaccinations and massive fiscal stimulus drive a boom.

Yet Fed Chair Jerome Powell has said he’s not considering pulling back monetary support any time soon, a stance that’s likely to encourage ECB policy makers to stay the course.

Lagarde will unveil new economic projections for the euro zone that should confirm a brighter outlook. Analysts expect both growth and inflation forecasts to be revised upward.

The focus will be on the medium-term inflation prognosis though, and that’s likely to show consumer-price growth below the ECB’s target of “below, but close to, 2%” next year and in 2023.

A more significant upward revision to inflation forecasts would likely draw questions over the continued need for elevated stimulus, if not at this meeting then in July or September.

There’s little chance Lagarde will be drawn into talking about an exit from emergency measures this week, but the topic is getting traction in some parts of the region. The combination of rising prices and sub-zero interest rates is handing ammunition to critics of the central bank, especially in Germany where elections are due in three months.

Economists predict the pandemic purchase program will end in March 2022 as scheduled. After that, many think an older asset-purchase program will be ramped up. It’s technically less flexible though, which is why Bank of France Governor Francois Villeroy de Galhau’s suggestion that it could be adapted has attracted interest.

One additional topic that may come up is the digital euro. The Governing Council has said it will decide by mid-2021 whether to launch such a project, and Lagarde has said a new form of central bank money could exist within the next four years if officials give the green light.

The ECB is one of several monetary authorities around the world considering action to keep up with technological advances and the rise of private crypto-assets.