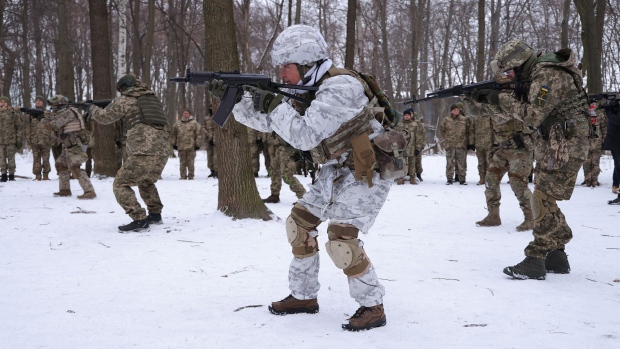 Kyiv Territorial Defence unit, trains on a Saturday in a forest on January 22, 2022 in Kyiv, Ukraine. , Photographer: Sean Gallup/Getty Images

(Bloomberg) -- The European Central Bank is asking lenders about their exposure to Russia as it prepares for any fallout should the country invade Ukraine, according to people familiar with the matter.

The ECB, which directly oversees the biggest banks in the euro area, is asking lenders how they would manage different scenarios, including sanctions against Russia, said the people, who asked to remain anonymous as the communication is private. An ECB spokesman declined to comment.

The Financial Times reported earlier Wednesday that the scenarios include the consequences of a move to block Russian banks from accessing the Swift international payments system.

Tensions have soared as Russia masses more than 100,000 troops on Ukraine’s border, though officials in Moscow have repeatedly said they have no intention of invading the country. Western allies face a challenge to piece together a weighty response as countries like Germany seek to shield their economies from potentially significant side effects.

While several international banks have dialed back their operations in Russia in recent years, Societe Generale SA, UniCredit SpA and Raiffeisen Bank International AG are still among the largest European banks in the country, according to data from the European Banking Authority.