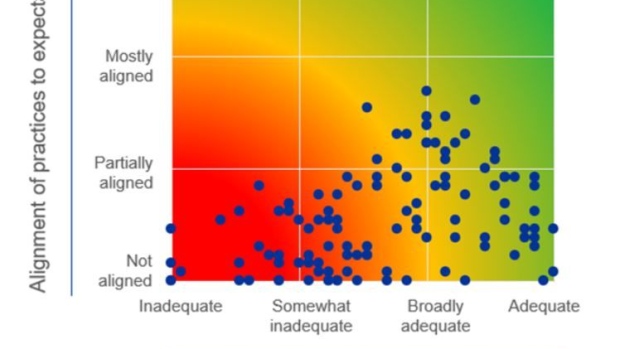 (Bloomberg) -- The European Central Bank will look at the trading operations of major lenders as part of climate stress tests next year, after judging that an assessment of loan books alone won’t give enough insight into the fallout they face from global warming.

The ECB, which has yet to publicly disclose the parameters of its tests, will also study the reputational and operational risks banks face, Alvarez & Marsal, a consultancy firm that’s involved in the process, told Bloomberg.

Reaching into banks’ trading operations represents an additional challenge for an industry that’s already warned it’s not ready for next year’s landmark tests. The ECB is seeking more details than other central banks and, behind the scenes, has stepped up pressure on the industry to meet the moment.

In Europe, politicians want banks to become a key plank in the fight against climate change by steering capital away from polluters. Investors are taking note as banks burdened by carbon-intensive balance sheets may face higher capital requirements, which could erode their power to pay dividends.

“No bank has what the ECB wants,” said Fernando de la Mora, a managing director at Alvarez & Marsal who’s advising banks on how to prepare for the stress tests. “Global banks face the added challenge of finding data from regions outside Europe, which is limited.”

The ECB is also asking banks for data on emissions associated with the revenue they generate, an approach the Bank of England opted against for its climate tests this year because of a lack of available data, according to Alvarez & Marsal.

In practice, euro-zone banks will have to estimate the carbon emissions of companies behind most of their fee and interest income. They’ll also need to provide data on the emissions, loans and revenue associated with their biggest clients across industries, the firm’s analysis shows.

The decision to include banks’ trading books adds a further layer of complexity to the exercise. But it will also allow the ECB to see what might happen to stock or bond portfolios if they’re exposed to shocks such as losses on the debt of oil companies, de la Mora said.

Both the ECB and the BoE are asking lenders to use a 30-year horizon for assessing how their balance sheets will weather risks arising from the transition of the economy away from polluting industries, according to Alvarez & Marsal. Yet the BoE is asking banks to also look three decades out when considering physical risks like extreme weather or wildfires, while the ECB is using a one-year horizon, the analysis shows.

“The ECB’s test covers more areas than that of the BoE, even if they use the same scenarios,” said de la Mora. But he says there will “probably be limited impact on capital” from the tests, because the goal first and foremost is to “push banks to build up their capabilities.”