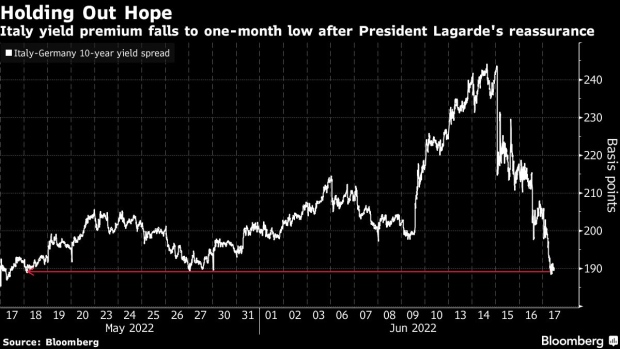 (Bloomberg) -- Details are emerging of how the European Central Bank plans to stave off undue panic in government bond markets as investors worry a repeat of the continent’s sovereign-debt crisis of the last decade may be on the horizon.

The ECB’s Governing Council held an emergency meeting Wednesday as the prospect of the first interest-rate increases in a decade to tackle record inflation sent Italian yields to their highest since 2013, widening the gap over equivalent German notes.

Officials’ announcement later, that work on a new instrument will be sped up, triggered a rally that lasted into the weekend. But its longevity hinges on them delivering something convincing in the coming weeks.

The early signs have offered some reassurance. Nothing is certain yet, though, and there’s much discussion about how feasible and effective the emerging instrument will be, while some flag legal issues as a possible impediment to its development.

“There are a lot of doubts on the firepower of the new tool and whether there would be enough support within the Governing Council,” said Mohit Kumar, a managing director at Jefferies International.

President Christine Lagarde told euro-area finance ministers Thursday that the tool will kick in if the borrowing costs for weaker nations rise too far or too fast, according to people briefed on their discussions. The instrument may be triggered if bond spreads widen beyond certain thresholds or if market moves exceed a certain speed, she said.

In terms of how it will look, people familiar with the matter describe a bond-buying mechanism where other securities in the ECB’s portfolio will be sold so as not to interfere with efforts to curb the spike in consumer prices.

Countries that benefit from it would have to meet certain conditions to avoid concerns the ECB is financing governments outright. The hope is that work on the new instrument will conclude in time for its July 21 policy decision, when rates are set to rise by a quarter-point.

There’s much speculation about these parameters.

“An explicit yield target or ceiling is unlikely,” said Axel Botte, market strategist at Ostrum Asset Management. “But judging by the ECB’s reaction to 4% 10-year Italian yields -- calling an emergency meeting -- this could be it.”

Deutsche Bank AG economists said conditions for the new tool could be tied to compliance with existing EU frameworks, and act as a possible “counterpart” to the NextGenerationEU pandemic-recovery package.

With details scarce on the size of the new instrument, Frederik Ducrozet, who heads macroeconomic research at Pictet Wealth Management, called for a program with “no ex ante limit on the total amount of purchases” and “full flexibility in terms of allocation of purchases across time and jurisdictions.”

There’s also the reshaping of the ECB’s PEPP program, which was rolled out as the Covid-19 crisis erupted but where net purchases ended in March.

Officials aim to flexibly reinvest maturing debt to support peripheral bond markets. People familiar with their plans say that about 17 billion euros ($17.7 billion) of bonds expire each month, with about 12 billion euros of that coming from core countries -- money that can be redirected to struggling markets.

That, they say, creates a defense that may ease stress for now. Flexibility may also involve front-loading reinvestments -- meaning the ECB could buy new bonds before older securities mature, the people said.

Commerzbank AG strategist Christoph Rieger isn’t convinced, saying an estimated 175 billion euros of PEPP reinvestments for the periphery over the next year compares with about 283 billion euros of ECB net purchases in periphery public-sector securities in the year through May.

“The numbers are meaningful but no game-changer,” he said.

There are also potential legal obstacles.

The ECB faces challenges in German courts over the PEPP program, while a previous challenge over the public sector purchase program saw the ECB have to provide information to justify the policy.

“Like its predecessors, the new ECB backstop will likely face legal challenges focusing on a possible violation of the prohibition of monetary financing, the principle of proportionality, and possibly the prohibition of privileged access,” said Goldman Sachs economists including Sven Jari Stehn.

Then there are some who see the need for larger-scale overhauls inside Europe -- something the ECB can’t paper over even with a new instrument and a retooled PEPP.

“We remain skeptical of the idea that the ECB can single-handedly preserve market and price stability if governments’ debt sustainability is questioned,” strategists at Societe Generale said. “Even if the ECB can deliver a sizable anti-fragmentation purchase program, eventually governments will need to sit down and discuss necessary reform.”