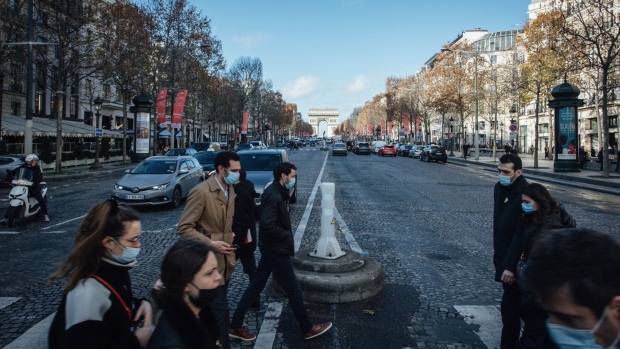 Pedestrians cross the Champs Elysee ahead of a new curfew in Paris, France, on Tuesday, Dec. 15, 2020. France eased some of its key lockdown measures, while extending other curbs and introducing a new curfew, as the nation continued its fight to get a grip on the coronavirus. Photographer: Cyril Marcilhacy/Bloomberg , Bloomberg

(Bloomberg) -- Members of the European Central Bank’s Governing Council differed over how much additional monetary stimulus was needed at last month’s meeting, even as they accepted the need for action.

The council agreed more aid was needed to preserve favorable financing conditions “in view of the economic fallout from the resurgence of the pandemic, the downward revision to the projected inflation path, and the resulting risks of an unanchoring of inflation expectations,” according to the account of the Dec. 9-10 meeting, published Thursday.

Concerns were also voiced over risks related to the exchange rate that might have negative consequences for the inflation outlook. The euro has jumped against the dollar during the crisis, putting downward pressure on import prices.

Policy makers argued for smaller and larger increases in the pandemic bond-buying program, and disputed how much the conditions on long-term loans for banks should be loosened.

“It was argued that the proposed increase in the pandemic purchasing envelope was insufficient to ease financing conditions further,” some members argued. Others advocated “keeping some powder dry.”

The Governing Council ultimately agreed on a 500 billion-euro ($608 billion) boost to the program, taking it to 1.85 trillion euros.

That only won broad backing because hawkish officials secured a caveat specifying the whole amount might not be deployed, officials familiar with the matter said after the meeting.

On the proposal for a higher allowance for the ECB’s program of ultra-cheap loans agreed at the meeting, some members expressed reservations that it “would make banks increasingly dependent on the Eurosystem as their funding source.”

Since the meeting, a double-dip recession for the euro area has become highly likely. Numerous banks have downgraded their forecasts in recent days to account for renewed restrictions. They’ve generally erased expectations for first-quarter growth and are instead predicting a second straight quarter of contraction.

Still, ECB President Christine Lagarde said on Wednesday that the institution’s forecasts -- last updated at the December meeting -- for a return to growth for the full year are still “very clearly plausible.”

She noted that uncertainties such as a vaccine and trade relations with the U.K. have cleared, and that the ECB’s outlook assumed lockdowns would last until the end of the first quarter.

“What would be a concern would be if, after the end of March, those member states need to continue having lockdown measures,” she said.