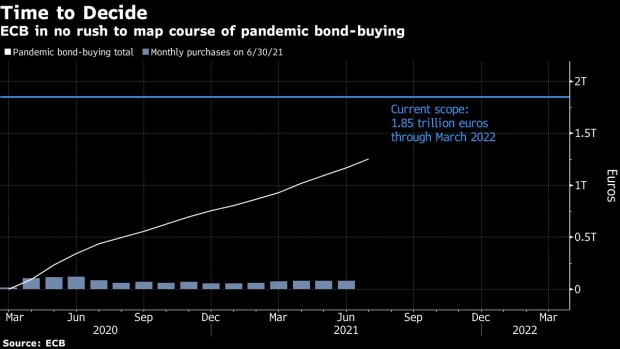 (Bloomberg) -- Investors waiting for a heads-up from the European Central Bank on the future of pandemic bond-buying in September will probably be disappointed, according to Governing Council member Martins Kazaks.

With nearly 600 billion euros ($713 billion) left to spend and the program running at least through the end of March, it would be much too early for a decision on whether to extend or phase out purchases, he said in an interview. Coronavirus infections are rising again across much of the region, threatening new restrictions that could jeopardize the recovery.

“Given the uncertainty, given how much time is left, there is no need to decide on that,” said Kazaks, who also leads Latvia’s central bank. “We will discuss it, but at the moment it would still be premature.”

Policy makers have set up their September meeting -- when new forecasts will become available -- as a crucial session to scrutinize the euro-area economy and its prospects, and to start debating post-pandemic monetary stimulus.

Kazaks urged investors to be patient in expecting results on when or how emergency support will be unwound. The next scheduled opportunity for a decision after September would be the ECB’s meeting on Oct. 28.

“It’s quite unlikely that we will come out in late March 2022 and say this is it, we’ve done our job and we terminate it,” Kazaks said. “We would like to warn the markets in advance -- but only as much as it’s reasonably possible.”

The ECB is in the process of implementing a new strategy to lift inflation following an 18-month review. Officials pledged last month to refrain from raising interest rates until the new 2% goal for consumer-price growth comes sustainably into sight in its projections, a change in tune that --based on current forecasts -- pushes hikes further into the future.

The slightly higher target -- previously the ECB aimed for inflation below, but close to, 2% -- and the updated guidance have sparked speculation among economists whether policy makers would step up stimulus to reach it.

Kazaks suggested that -- if anything -- the time frame, not the pace of support, would be affected.

“If it’ll take a longer time for inflation to sustainably reach 2% then yes, it means that hikes will now come later in the game,” he said.

At the same time, the ECB’s commitment on rates will help financial markets to better understand and predict future policy, he said. “And it’s quite likely that increased clarity may in fact push inflation toward 2% sooner and thus reduce the need for policy support.”

Kazaks rejected criticism expressed by his colleagues Jens Weidmann and Pierre Wunsch that the ECB’s commitment on rates covers a period of time that’s much too long.

“Our current forward guidance on rates is a balanced view on how we may react when we see inflation approaching 2%. Is this tying our hands too much or too far into the future? I don’t think so,” Kazaks said. “If we find that this is not appropriate for the given economic situation then we can adjust our forward guidance.”