A slump in capital-markets activity and expectations that the economy may take a turn for the worse are casting a pall over a Canadian bank earnings season that showed the lenders’ core businesses in otherwise solid shape.

Volatile equity and debt markets, meanwhile, put the brakes on transactions that fuel the companies’ investment-banking franchises, cutting into one of their top sources of fee revenue. That trend took a heavy toll on Royal Bank of Canada, which reported earnings that missed analysts’ estimates. The S&P/TSX Commercial Banks Index is down 2.3 per cent since Bank of Nova Scotia kicked off the reports, more than the 0.5 per cent drop for the broader S&P/TSX Composite Index.

“It feels like everyone is waiting for the next shoe to fall because these have all been very good results, but there’s still not enough to bolster the confidence of investors on the outlook again,” Barclays Plc analyst John Aiken said in an interview. “There’s just so much uncertainty.” 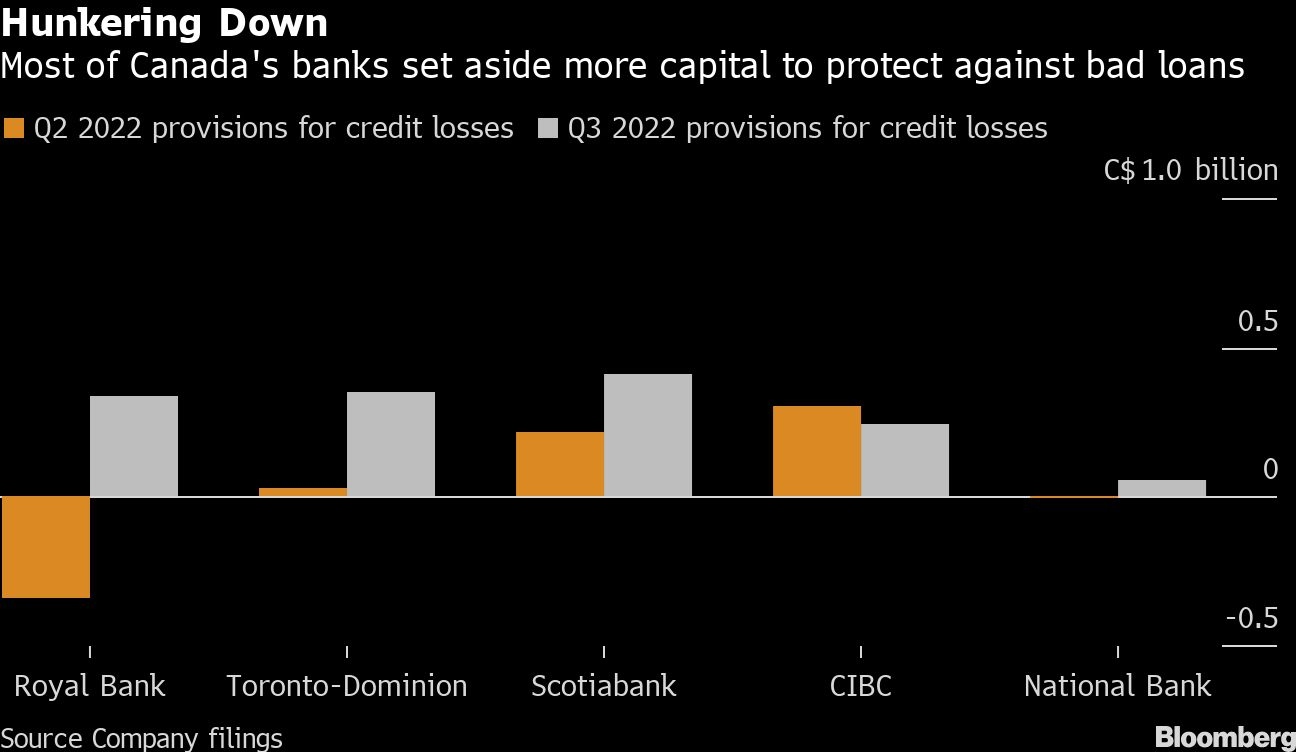 Bank of Montreal is scheduled to report third-quarter results Tuesday, rounding out the earnings season. The lender is projected to post an 8.2 per cent decline in net income as it sets aside provisions of $220.2 million (US$169 million), according to analysts’ estimates, compared with a release of $70 million a year earlier.

The bank also will be under pressure to demonstrate a strong performance from its US operations after Toronto-Dominion “set a fairly high bar” with growing loan balances and a widening net interest margin in its American division, Aiken said.

Bank of Montreal also is heavily focused on lending to businesses, and Aiken said commercial loan growth from Canada’s banks has been “extraordinary” so far. Interest rates would need to rise even further to curb demand, and strength in the commercial segment should help the banks in the quarters ahead, he said.

“I don’t necessarily see that abating, particularly because there is still demand out there for goods and services,” Aiken said. “We still have a very good employment rate in Canada, and all this indicates that we’re not going to go into a recession soon.”

The results from the banks’ capital-markets divisions also may be at a “cyclical low” and are poised to pick up next quarter, he said.

Still, investors may be having their enthusiasm damped by gloomy commentary from the banks themselves. Royal Bank Chief Executive Officer Dave McKay said on his firm’s earnings call that “the macro environment remains uncertain.” The myriad challenges include persistently high inflation, supply-chain constraints and geopolitical tensions, as well as “COVID-related tail risk in Asia, tight labor markets and, more recently, drought related to climate change,” he said.

“Investors are looking at the balance of probabilities and are saying that the consensus numbers may be too high in a negative environment,” Aiken said. “And, right now, because of the uncertainty in the outlook, it doesn’t look like there’s that many investors that are willing to step into the breach.”