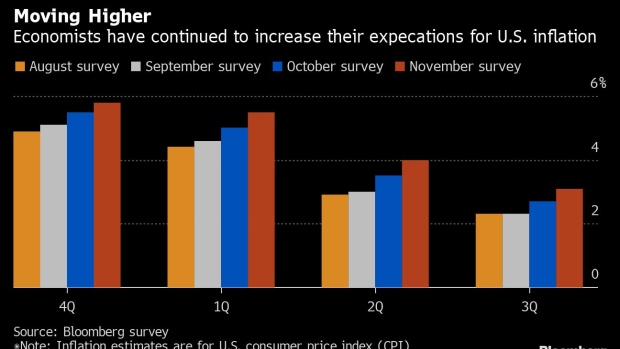 (Bloomberg) -- Economists are ratcheting up their U.S. inflation forecasts through 2022 as supply chain constraints persist and price pressures broaden out to categories like shelter and energy.

The consumer price index will rise 5.8% at the end of the fourth quarter from a year earlier, above the 5.5% estimated a month ago, according to the median forecast of 47 economists in Bloomberg’s latest monthly survey. However, some of the projections were submitted prior to Wednesday’s October CPI data, which showed the biggest annual gain since 1990.

Consumer prices forecasts were revised up for every quarter through the end of next year, the survey showed.

In October, consumer prices rose 6.2% from a year earlier, exceeding all projections and reflecting higher prices for energy, shelter, food and vehicles. Many economists expect inflation to get worse before it gets better due to supply chain snarls and an ongoing labor shortage.

“Rising employment costs suggest the risks are skewed towards higher for even longer on inflation, together with the fact a record proportion of companies expect to raise their prices further in the coming three months,” said James Knightley, chief international economist at ING.

Economists project that the personal consumption expenditures price index, the inflation gauge favored by the Federal Reserve, will also be higher than previously expected. The figure will likely rise 4.9% on an annual basis in the fourth quarter, revised from 4.6% in the previous survey.

Estimates for economic growth were revised higher for every quarter of 2022, driven in part by expectations for more private investment and government spending. Those revisions come after Congress passed an infrastructure package that will allocate $550 billion of fresh spending for roads, bridges, public transit and other projects in coming years.

“The passing of the infrastructure bill and the growing prospect of approval of the Build Back Better package gives us additional confidence in the durability of the growth story,” Knightley said.

Average hourly earnings are expected to be stronger than prior surveys showed, with the measure increasing by 4% annually in the final three months of 2022 after a 3.5% October estimate. That could be due to an expectation that labor shortages will persist next year, leading employers to continue to offer higher pay to attract workers.