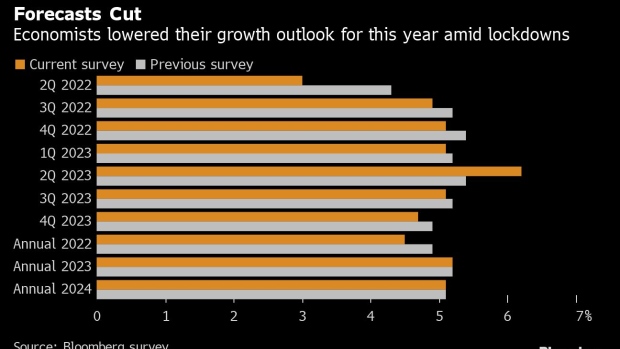 (Bloomberg) -- Economists lowered their economic growth forecasts for China in every quarter through to March 2023 after Covid lockdowns led to a sharp slump in key economic data last month, the latest survey from Bloomberg shows.

Gross domestic product will likely expand 4.5% this year, down from a previous estimate of 4.9% and a full percentage point below Beijing’s official target of about 5.5%, according to the median estimate of economists in the poll.

Second-quarter growth forecasts were slashed by more than 1 percentage point to 3%, while cuts of less than 50 basis points in forecasts were seen in the third- and fourth-quarter respectively, the quarterly survey showed.

The government is rolling out a package of support measures to shore up the world’s second-largest economy, which is under severe strain after Covid-19 outbreaks and stringent restrictions to control infections forced businesses to halt operations, disrupted supply chains and put a brack on consumption.

The country’s growth path going forward depends largely on the flexibility of lockdowns, with infrastructure investment supported by the local government special bond issuance being the only growth engine for the rest of this year, according to Iris Pang, chief China economist at ING Bank.

“Fiscal measures should be the main supportive measures, followed by some monetary policy,” for example, the re-lending program for small- and mid-sized businesses, she said.

Other highlights in the survey: