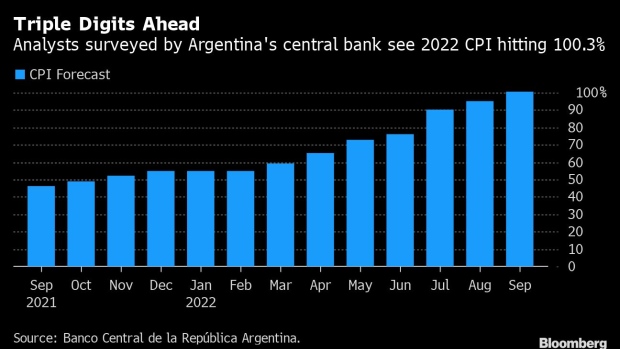 Shoppers purchase groceries at a market hosted by the Union of Popular Economic Workers (UTEP) in front of the National Congress building in Buenos Aires, Argentina, on Thursday, July 14, 2022. Argentine consumer prices rose at the fastest pace in more than three decades in June, with worse expected after Economy Minister Martin Guzman quit this month. , Bloomberg

(Bloomberg) -- Economists in Argentina see prices increasing 100% by December, cementing a view that the South American country is on pace to hold the world’s highest inflation rate among major economies.

The forecast, published Thursday in the central bank’s monthly survey, is the first time private economists have projected triple-digit inflation, not seen in crisis-prone Argentina since the early 1990s when hyperinflation ruined the economy. As of August, annual inflation stood at 79%.

During his nearly three years in office, President Alberto Fernandez has implemented price freezes, currency controls and import restrictions, but without a big picture economic plan that markets find credible. The cobweb of policies has failed to cool Argentines’ concerns about a major currency devaluation since the government controls the official exchange rate with a dwindling amount of cash reserves.

While economists see the official rate ending this year at 173 pesos per dollar, they forecast it reaching 310 per dollar by the end of next year, implying a faster pace of decline, according to the survey.

As a result, inflation expectations have worsened significantly. Last year, Fernandez’s proposed budget for 2022, which congress voted against, forecast 33% inflation. Even at the start of this year, private economists saw prices rising by 55% through December.

Other key takeaways from the central bank’s survey: