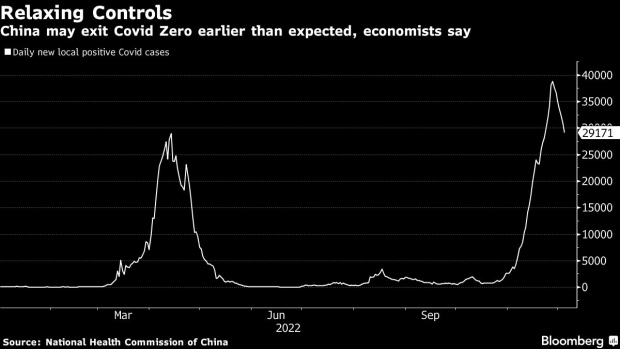 BEIJING, CHINA - DECEMBER 04: Epidemic control workers wear PPE as they walk in the street by a closed shop near a community with residents under health monitoring for COVID-19 on December 4, 2022 in Beijing, China. In recent weeks, China has been recording some of its highest number of COVID-19 cases since the pandemic began, while some restrictions have been relaxed, authorities are sticking to their approach to containing the virus with targeted lockdowns and testing, mask mandates, and quarantines. The government has launched a vaccination drive targeting the elderly, and indicated that some positive cases may be able to quarantine at home instead of a government facility. (Photo by Kevin Frayer/Getty Images) , Photographer: Kevin Frayer/Getty Images AsiaPac

(Bloomberg) -- Economists are bringing forward their projections for China’s exit from Covid Zero as the government begins relaxing controls in many cities.

Nine of the 16 economists surveyed by Bloomberg last week said China will reopen the country faster than they had previously expected. Of those, four say it will happen in the second quarter of 2023, while three see it happening earlier.

The government has accelerated its shift toward reopening as it became evident its strategy of eliminating infections was failing to bring the current record Covid outbreak under control. The virus restrictions have caused widespread damage to the economy and fueled protests in several major cities, prompting authorities to roll back some mobility curbs in recent days.

Beijing is now allowing some low-risk patients to isolate at home instead of quarantine camps. The financial hub of Shanghai scrapped PCR testing requirements to enter outdoor public venues such as parks or use public transportation. And top officials and the state media have also softened their rhetoric about the virus.

Stocks rallied and the yuan strengthened on Monday on signs of faster reopening.

“The timing of a major Covid policy change may be a bit earlier than our baseline expectation of after March 2023” UBS AG economists including Wang Tao wrote in a note Monday.

Of the 16 economists polled by Bloomberg, seven predict the reopening will happen in the second quarter of next year, and four see it in the first quarter. The economists weren’t asked to define what a full reopening would entail.

The survey was conducted between Nov. 30 and Dec. 2, before this weekend’s moves in major cities like Shanghai and Hangzhou to ease restrictions.

Some of the economists warned the transition would be bumpy, likely involving trial and error by authorities as they grapple with insufficient medical resources and low elderly vaccination rates.

“China’s reopening is on the way but it will not be a plain-sailing journey, and the market should not expect a big bang removal of all epidemic prevention measures as in the West,” said Gary Ng, senior economist at Natixis SA.

That makes for an uncertain outlook for economic growth. Five of the 16 economists said they will lower their growth forecasts for the fourth quarter and the full year of 2022. The median projection was lowered to 3.8% and 3.2%, respectively, from 3.9% and 3.3% in the previous November survey.

“What matters more to the outlook is the practical realities on the ground that limits the ability of China to ease its Covid restrictions and return economic life to normality,” said Heron Lim, an economist at Moody’s Analytics. The constraints include less effective vaccines in use and a reluctance to use foreign-made mRNA vaccines, vaccine hesitancy among the elderly and the limited capacity of the public health system to deal with a surge in cases, he said.

In a separate survey, economists expect the central bank to cut the reserve requirement ratio for banks once more, in the first quarter of 2023. The one- and five-year loan prime rates are also expected to be lowered by March, while the interest rate on the medium term lending facility rate is projected to be lowered in the second and third quarters of next year.