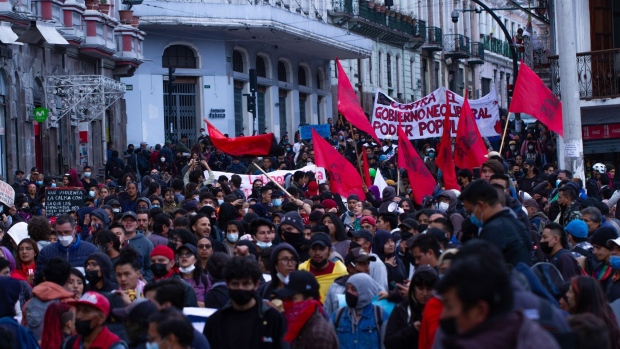 (Bloomberg) -- Ecuador’s congress will extend a debate to Sunday that could trigger an impeachment vote against market-friendly President Guillermo Lasso.

The virtual session was suspended overnight on Saturday with 40 of 137 lawmakers left to speak. Leftist opposition party Revolucion Ciudadana, which is close to ex-President Rafael Correa, is seeking to remove Lasso by taking advantage of a constitutional clause that allows impeachment on grounds of a severe crisis.

Lasso, who took office a year ago, is grappling with unrest as protesters led by indigenous groups paralyze parts of the country and threaten oil production. The protesters are demanding higher fuel subsidies, a moratorium on new oil and mining projects, and a slowdown of moves to privatize government assets amid broader concerns about Lasso’s plan to overhaul the economy with support from the International Monetary Fund.

Revolucion Ciudadana has 47 seats in Ecuador’s fractured congress, more than any other party, but it would need 92 votes to oust Lasso. Several parties across the political spectrum have so far rejected the impeachment notion. If Lasso is impeached, he’d be replaced by Vice President Alfredo Borrero while elections to replace him are organized.