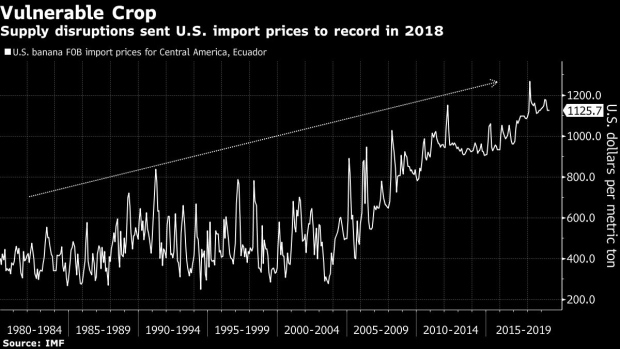 (Bloomberg) -- The detection of a banana-killing fungus in neighboring Colombia is setting off alarm bells in Ecuador, the world’s biggest exporter of Americans’ favorite fruit.

Growers in Ecuador, where bananas generate $2.6 billion in exports and 2.5 million jobs, are battling to prevent Fusarium TR4, also known as Panama Disease or Fusarium wilt. Some farms are disinfecting shoes, tools and vehicles and have set up unique access paths for workers. Others are considering putting up fences to isolate crops, the association of banana exporters says.

Ecuador has more than 7,000 growers, many with very small plots that sometimes share water supplies, leaving areas vulnerable to infestation. The fungus’ arrival could be “catastrophic,” said Marianela Ubilla, vice president of the association.

“This is very worrisome to us because the fungus is moving about 100 kilometers (62 miles) a year,” and has traveled to the Middle East, Asia and Australia, Ubilla said by telephone from Quito.

While Ecuador began preventative measures even before Colombia detected the fungus earlier this month in 175 hectares (432 acres) near the border with Venezuela, tensions are now running higher in the region. Colombia authorities have stepped up surveillance to try to contain the disease.

Fusarium TR4 can be transmitted through planting materials or infested soil particles carried by clothes, water or vehicles. It can remain dormant in soil for decades. Smuggling plants across borders is another way of spreading the disease. While the fruit is safe to eat, there’s no treatment for plants, which wither and die.

Colombia Agriculture Minister Andres Valencia Pinzon met earlier this month in Quito with representatives of the 15 main exporting countries to present steps his country has taken. The ministry is also considering offering funding for smaller producers as part of efforts to have all growers meet export standards.

In Guatemala, the top supplier to the U.S., authorities are tightening customs on goods as well as setting up airport checkpoints to scan for people arriving from countries suspected of having the disease.

The menace comes as Latin American farmers face low prices for some of the regions’ other top farm exports, including sugar and coffee. The Philippines, Costa Rica, Colombia and Guatemala complete the list of five biggest banana shippers. Latin America accounts for 25% of world banana production and 80% of exports.

The region’s efforts to prevent the spread of the fungus should be of keen interest to U.S. consumers, who gobble down more than 28 pounds of bananas each a year on average, according to Rabobank, citing 2017 data, the most recent.

“Bananas are such a global staple in the world diet that every time there’s a major disruption, or a disease threat, there’s got to be concern,” Fumasi said by telephone from Fresno, California.

To contact the reporter on this story: Marvin G. Perez in New York at mperez71@bloomberg.net