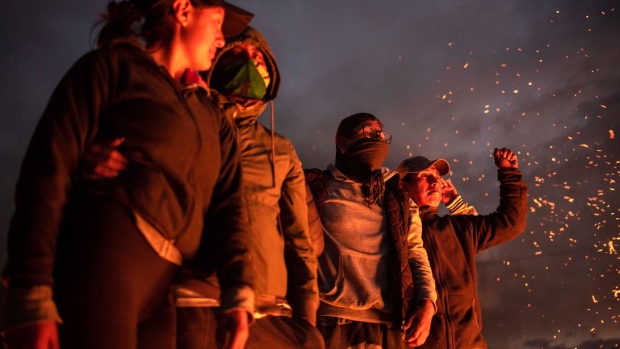 Riot police drive through demonstrators with tear gas during a protest in the Historic Center neighborhood of Quito, Ecuador, on Wednesday, Oct. 9, 2019. As Ecuadorian protesters infuriated by rising fuel prices invaded government offices and oil fields, the president and his administration fled the capital, warning of a coup. Photographer: David Diaz Arcos/Bloomberg , Bloomberg

(Bloomberg) -- Freddy Heredia this week downed his tools, left his wife and his bean and squash fields in Ecuador’s mountains behind and joined tens of thousands of his fellow indigenous farmers for the biggest anti-government protests in a generation.

The fuel price increases imposed last week as part of an International Monetary Fund-backed austerity drive will make his precarious existence even tougher, he said Friday. So Heredia and a group of neighbors packed into the bed of a rented pickup. They jounced over potholed roads to Quito, the capital, where for a week demonstrators and police have clashed in the streets.

Indigenous Ecuadorians represent about 7% of the population, and historically have been impoverished and dispossessed. But over the past week they have led the opposition to President Lenin Moreno, bringing large swathes of the nation to a standstill with strategically placed road blocks. Moreno’s move to end fuel subsidies was welcomed by the IMF, since they cost the government $1.4 billion per year, but Heredia said the move will bring misery to him and his neighbors.

“To others, these reforms might look like progress, but for us it means underdevelopment and higher living costs,” Heredia said in an interview Friday in a house in Quito used by indigenous groups as a refuge, supply center and aid station.

Just before Heredia spoke, there were shouts of “Injured! Injured!”, and the first of the day’s wounded were brought in for treatment. One man had swollen eye and another a leg splinted with wood from a broken chair. Both said they’d been hit by tear gas canisters in a confrontation with the police near the nation’s congress building.

The public ombudsman’s office puts the death toll associated with the protests at five, with the number of arrests estimated at roughly 1,000.

Most indigenous Ecuadorians work in the rural economy, which has run on subsidized fuel since the 1970s, and Moreno’s decision to end it overnight threw it into crisis. The government eliminated subsidies on gasoline and diesel Oct. 2, which caused a 30% rise in low-octane gasoline prices while diesel prices more than doubled.

“Our comrades have told us that the cost of tilling per hectare has already doubled,” said Freddy Maila, 35, whose family works a property in San Miguel de Collacoto in the Chillos Valley east of Quito.

Heredia, 33, and his wife work on an eight-hectare (20-acre) plot in the arid Guayllabamba Valley north of Quito that they share 130 people. They till the land by hand. Much of the cultivation is done by women, while the men go into the city to look for work in trades such as construction and gardening.

Heredia and his wife consume much of the food they produce. Beyond that, they spend about $100 per month on food for themselves, such as chicken from a neighbor or canned tuna, and about $40 per month on utilities in their shack.

To take his produce to the local market by pickup, Heredia needs to spend about $120 a month, a price he fears will soar with the end of the subsidies. Some debt-laden farmers say they face ruin unless the policy is reversed. Initial opposition to the fuel price rises was led by transport organizations and trade unions, but indigenous groups took over leadership when they arrived in cities en masse.

Ecuador’s indigenous people are the descendants of groups who have lived in the nation’s Andes mountains and Amazonian rain forest from time immemorial, who were reduced to serfdom by Spanish colonialists. They face various degrees of discrimination at the hands of the nation’s white and mestizo population, and tend to be among the nation’s poorest inhabitants.

They’ve been gaining political strength since the the 1980s, as they became more organized, and indigenous organizations played major roles in popular unrest during the 1990s and early this century that unseated three presidents. Now, they’re Moreno’s most forbidding obstacle.

Their strong presence in Andean rural communities has made it easy for then to virtually shut down large areas of Ecuador by blocking roads through the mountains.

In Quito, farmers arrived dressed in ponchos that vary in color and style depending on their region, and some have traditional spears. Many young men mask their faces, and wear hard hats and carry makeshift shields for street fighting. They go to demonstrations armed with clubs, rocks and Molotov cocktails.

Protesters have clashed daily with the police, and have continually upped their demands. Leaders initially called for a restoration of canceled fuel subsidies, then that Moreno leave office and, on Thursday, their umbrella group issued a statement saying the protests won’t stop until the IMF leaves Ecuador.

‘’It’s imperative to stop the violence,” Moreno said in a brief televised message Friday. “I call on the leaders to have direct dialogue with me,” even to discuss his decree ending the subsidies.

But Heredia said he and his comrades would remain determined, steeled to opposition by a life that has him budgeting his pennies for canned tuna and a once-a-month splurge on beef he shares with his wife in a home that measures just 3-by-7 meters.

“They say whoever has a lot of kids has no television but we have neither,” he said. “How could I have kids when the economy is in this state?”

To contact the reporters on this story: Matthew Bristow in Bogota at mbristow5@bloomberg.net;Stephan Kueffner in Quito at skueffner1@bloomberg.net