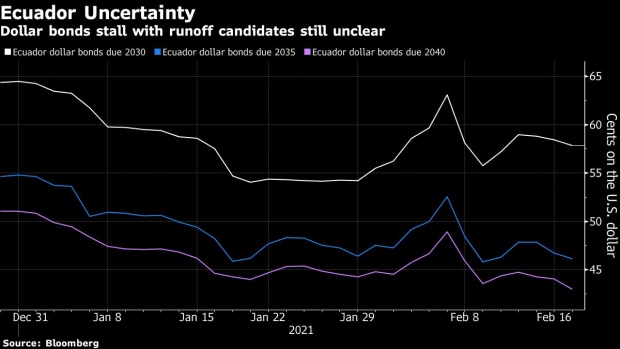 (Bloomberg) -- The socialist candidate who won the first round of Ecuador’s presidential election had lunch with investors in New York this week to try to persuade them not to panic if he wins.

Andres Arauz pledged to provide investors with legal certainty if he’s victorious in the April 11 runoff, as well as the chance to invest in industries including telecommunications and agriculture, he said in an interview with Ecuadorean TV channel Telerama.

He also met with staff from the International Monetary Fund during his U.S. trip, according to his campaign team and the fund’s press office.

Arauz, 36, was handpicked by former President Rafael Correa, who had strained relations with bondholders after defaulting on more than $3 billion of debt in 2008. The nation’s dollar bonds strengthened ahead of the Feb. 7 vote, as Arauz adopted a more conciliatory tone, and eased off on his anti-IMF rhetoric.

On Tuesday, he met with investors for lunch to assuage concern surrounding his economic plans, according to Victor Sierra, chief executive officer of Torino Capital LLC, which coordinated the meeting.

Arauz has promised to distribute $1,000 to one million needy families in the first week of taking office, to be paid for out of the central bank’s reserves. He has often criticized the austerity measures demanded by the IMF, which provided $4 billion in emergency loans to Ecuador in 2020.

As things stand, Arauz will likely face career banker Guillermo Lasso in the second round. With 99.93% of the ballots counted, Arauz had 32.7% of valid votes, while Lasso had 19.7%, putting him narrowly ahead of indigenous party Pachakutik candidate Yaku Perez, who had 19.4%. Whoever wins will take office on May 24.

Ecuador’s dollar bonds due in 2040 slipped about half a cent on Wednesday to 43 cents on the U.S. dollar, the lowest in just over a week.

On Feb 12, Lasso and Perez agreed to seek a recount to verify who came second to Arauz. The electoral authority spent days considering the idea, then said late Tuesday that it would declare results once the few outstanding unclear votes are tallied, without a recount.

Perez has alleged fraud, and said Wednesday said that he will continue to insist on a recount, and that he wouldn’t support Lasso in the runoff. His party Pachakutik has begun a protest march scheduled to arrive in Quito by Feb. 23.