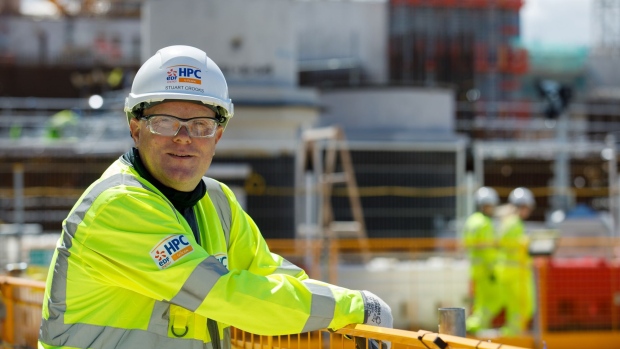 The largest and most advanced infrastructure project in the U.K. will miss three key milestones this year, one of them critical -- risking the 2025 completion deadline. EDF plans to make-up time by the end of 2021 but the threat of a second wave of coronavirus and lockdowns could cause more long-term set backs.

The U.K. government had put nuclear at the heart of its effort to attract billions of pounds of investment in new power plants and create thousands of jobs but spiraling costs, delays and much cheaper renewable power have dampened enthusiasm for the technology.

“We’ve absorbed a lot of factory delays but we had some margin in our program to do so,” Hinkley Point C’s managing director Stuart Crooks said in an interview on-site in the southwest of England. EDF still expects Hinkley to be finished on time.

Nuclear projects are complex and usually cost more and take longer to complete than expected. Hinkley Point C has already exceeded it’s initial budget and is expected to cost as much as 22.5 billion pounds ($29.2 billion). Once finished it’ll supply power to more than six million homes.

The French utility is working on the assumption that the virus peters out by the end of the year so supply chains and work at Hinkley can return to normal.

There are about 4,500 staff currently on the site that covers an area equal to 245 soccer fields. Initial plans were to ramp-up the number of workers to around 6,000 but that depends how long social distancing rules stay in place.

The factories that supply EDF for the project are still only working at 50% capacity on average, due to the pandemic but are increasing output slowly, Crooks said. In the pre-fabrication bunker where huge steel rings are being welded together to make a metallic liner for the reactor building, work has fallen behind.

There were delays in getting steel delivered from France during the lockdown. EDF resorted to sending workers across the Channel to pick up the material themselves, and they’re still waiting for metal plates to arrive from Spain.

The first steel liner will be finished in September and the second by the end of the year. The vast prefabricated structure will be lifted in its entirety by “Big Carl” -- the world’s largest crane.

Crooks and his team have had to adapt and change the order of tasks they’d planned and there’s not much room left in the schedule in the event of a second wave of coronavirus.

“We are confident that we’ve followed every government guideline and will always do,” said Crooks. Until there’s a vaccine “we’ll be at risk of having directions we’re not in control of and we will react and manage that as best we can.”

(Adds detail about milestones in table)