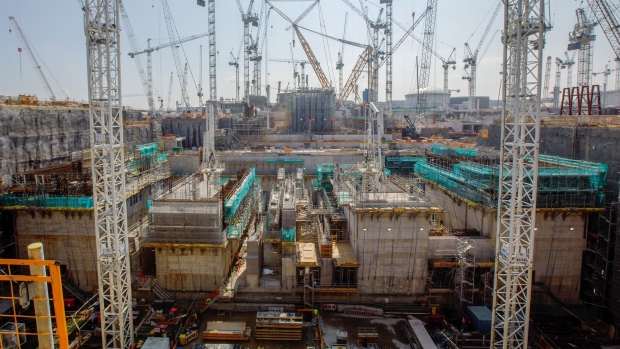 The basin for nuclear reactor Unit 1 on the construction site for the Hinkley Point C nuclear power station near Bridgwater, U.K., on Sept. 15, 2021. , Bloomberg

EDF now expects the two reactors it’s building in Southwest England to cost between £25 billion ($31.2 billion) and £26 billion, the French energy giant said in a statement Thursday. That’s up from a previous range of £22 to £23 billion.

It’s the fourth budget increase in five years. The company also pushed back the date when the first reactor will produce power by 1 year to June 2027.

“People, resources and supply chain have been severely constrained,” EDF said in the statement.

The two reactors are blazing a trail for a nuclear renaissance in Britain, as the government seeks to boost the country’s energy independence and reduce its reliance on fossil fuels. While rising costs of metals, cement and labor are affecting numerous industries, the revised plan may revive a controversy over how expensive the technology is and whether further holdups are inevitable.

The reassessment comes as EDF is in talks with the UK government to arrange financing for a second UK nuclear plant that would use the same design. Delays and cost overruns may put off investors at a crucial point in negotiations for the proposed Sizewell project. Reactors compete for investor capital with renewables, which provide returns much quicker.

EDF has previously increased the Hinkley Point budget in 2017, 2019 and in January 2021, from an initial estimate of £18 billion when the contract was signed with the U.K. in 2016. The debt-laden French utility has a 66.5% stake in Hinkley Point C and China General Nuclear Power Corp. owns the rest. The cost overruns may force the French company to take on a larger part of the project.

(Adds statement from company in the fourth paragraph.)