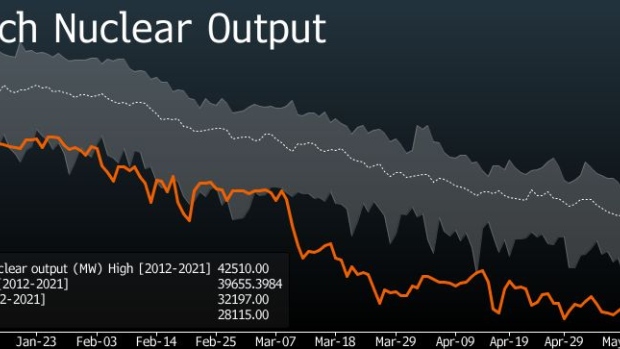 (Bloomberg) -- Electricite de France SA warned that unusually warm river temperatures are likely to force it to reduce nuclear output at time when about half the country’s reactors are already offline.

With air temperatures in Paris forecast to climb above 25 degrees celsius (77 Fahrenheit) this weekend, some of the rivers used to cool EDF’s nuclear power plants are set to get too warm to ensure normal output and production may have to be cut, the utility said Tuesday. Nuclear output is already down with 27 of the nation’s 56 reactors halted for repairs or maintenance.

EDF’s alert highlights Europe’s struggle to navigate an energy crisis that’s pushed up household bills and pressured governments to combat the rising cost of living. While France is traditionally an exporter of electricity, its faltering nuclear production could see output plunge this year to its lowest in three decades just as Russia’s war in Ukraine pushes Europe to reduce dependence on Russian energy.

Nuclear plants are usually placed close to a body of water for cooling. During summer heatwaves, French reactors regularly cut output to keep core temperatures steady as the chilling effect of the water reduces. River warming alerts are more common in August and September, and unusual for May.

The 3.6-gigawatt Blayais nuclear station by the Garaonne river in southwest France could be “particularly” affected by the recent rise in temperatures, EDF said in a regulatory filing. Output at one of the plant’s units had already been cut due to “environmental issues” Monday until early Tuesday morning, according to a report on the company’s website.

An “anomalously strong” high pressure weather system is encompassing most of western Europe, with unusually warm temperatures set to rise even higher this month, according to a report by forecaster Maxar Technologies Inc. The mercury is set to hit 27.5 Celsius in Paris by the middle of next week.