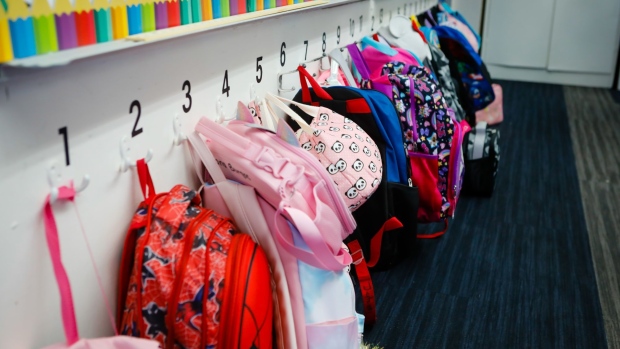 Student backpacks hang in a classroom during the first day of classes at a private school in North Miami Beach, Florida, U.S., on Wednesday, Aug. 18, 2021. Florida’s State Board of Education said it would force defiant school districts to comply with Republican Governor Ron DeSantis’s executive order forbidding them from mandating students wear masks as a way to slow a surge in Covid-19 cases. , Bloomberg

(Bloomberg) -- President Joe Biden is attempting to rally fractious Democrats around a whittled-down economic package that his administration is promoting as a monumental achievement for social spending and climate programs.

The $1.75 trillion package, which the White House on Thursday called “historic,” is half the size of a budget outline passed by the House and Senate in September in response to demands by moderates to reduce the price tag. Programs such as paid family leave and tuition-free community college didn’t make the cut, but the White House spent Thursday morning touting what the package funds.

“It’s twice as big, in real dollars, as the New Deal was,” White House Chief of Staff Ron Klain tweeted as Biden traveled to Capitol Hill to sell Democrats on the package.

Here are some of the climate and social programs in Biden’s framework:

Biden’s economic plan would spend $400 billion on early childhood programs, including limiting child care costs to no more than 7% of income for middle-class families, defined as up to 250% of state median income. Both parents must be working, seeking work, in training or taking care of a serious health issue to participate in the program, which is funded for six years.

The plan would also create universal pre-K for three- and four-year-olds, expanding access to more than 6 million children.

The framework would extend the popular child tax credit for another year for households earning up to $150,000 annually, according to a White House summary. The plan would provide monthly payments to nearly 35 million American households and 90 percent of American children for 2022, the White House estimates

The current expanded tax credit begins to phase out for married couples earning $150,000 but provides a smaller credit to families earning as much as $400,000 annually. It’s unclear whether the expansion for 2022 includes the same phase out.

It also expands Medicare to include a hearing aid benefit. Progressives pushed for a Medicare expansion to include dental and vision benefits but that fell by the wayside during negotiations with moderates.

The framework also sets aside $150 billion for home care for the elderly and people with disabilities, expanding on an existing Medicaid program.

The framework calls for spending $150 billion on affordable housing with the goal of building more than 1 million on new affordable rental and single-family homes, rental and down payment assistance, and public housing.

The plan would put $40 billion into higher education and workforce training programs. Money would be used to raise the maximum Pell grant and invest in workforce development, including community college programs. The framework would also support Historically Black Colleges and Universities and other higher-education programs that serve minorities.