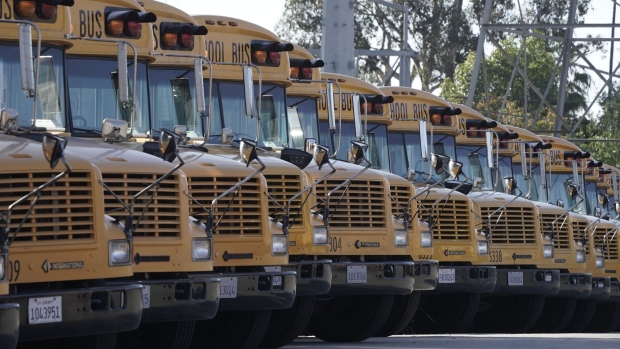 Navistar International Corp. school buses are stored at the San Diego Unified School District Transportation Department in San Diego, California, U.S., on Thursday, July 9, 2020. The U.S. economy is caught in the middle of President Trump's tug-of-war to reopen schools -- and could end up damned no matter what happens. Photographer: Bing Guan/Bloomberg , Bloomberg

(Bloomberg) -- U.S. public schools need $200 billion in federal aid to be able to safely open for the fall semester with the coronavirus continuing to circulate, witnesses told a House panel.

“The worst thing in the world for me would be if we opened pre-maturely, not thoughtfully, opened for two or three weeks and then had to shut everything back down,” Arne Duncan, secretary of education in the Obama administration, said on Thursday. “That just further traumatizes children, endangers adults, teachers, parents. We should open very slowly.”

Most of the largest U.S. school districts have opted for remote learning to start the academic year, despite President Donald Trump urging them to open classrooms.

Extra funding for schools is part of the negotiations between the White House and congressional Democrats on a new pandemic relief plan. Republicans have proposed providing about $70 billion for primary and secondary educations, with a substantial portion of that tied to reopening classrooms and 10% going to private and religious schools.. Democrats demand more for public schools, without restrictions.

Robert Runcie, superintendent of schools in Broward County, Florida, joined Duncan’s call for $200 billion more in federal funding in the hearing of the Select Subcommittee on the Coronavirus Crisis. He said school administrators, students and parents face difficult choices if students are back in classrooms and one tests positive for Covid-19.

“You have one case in a school, it’s going to create a climate of fear that makes it difficult to have a reasonable learning environment,” he said

Several school districts have confronted Covid cases in the first days that in-person classes have resumed, or are deciding to hold off on classroom instruction for now.

Chicago, the third largest U.S. school district, announced Wednesday they would start the year online following the city’s recent jump in cases. New York City is still on track to reopen schools in September, but no final call has made. Governor Andrew Cuomo said he hopes to make a decision this week.

“We can be sure that there will be many more difficult decisions, including those on schools, between now and when we find a safe and effective vaccine that is accessible to all Americans,” Caitlin Rivers, assistant professor at the Johns Hopkins Bloomberg School of Public Health, said.

Despite coronavirus flare-ups in much of the country, Trump has continued to insist that that schools reopen.

“This thing’s going away -- it will go away like things go away, and my view is that schools should be open,” Trump said Wednesday on Fox News. He added, contrary to the conclusions of federal health officials, that children “are virtually immune from this problem. And we have to open our schools.”