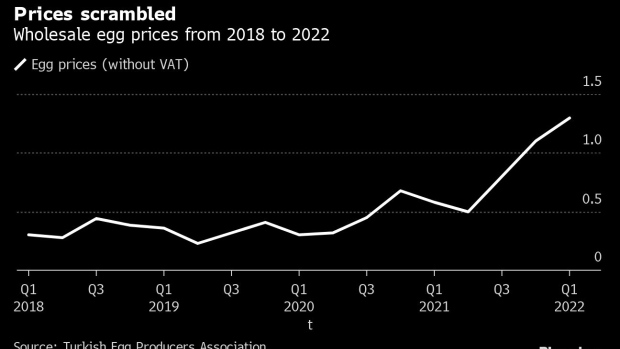 BANDIRMA, TURKEY - MAY 06: An employee sorts eggs at Aytekin chicken farm on on May 06, 2022 in Bandirma, Turkey. Inflation soared to nearly 70% (69.97%) over one year in April in Turkey, the highest since February 2002, according to official figures released on May 5. Egg prices in Turkey increased by %178 in a year. (Photo by byrak Kara/Getty Images) , Photographer: Burak Kara/Getty Images Europe

Turkey’s egg producers have found themselves at the forefront of a deepening controversy over who’s to blame for the country’s inflation crisis as the government intensifies pressure on businesses to keep prices down.

Ever since President Recep Tayyip Erdogan first railed against suspected profiteering in September, Turkey’s anti-trust watchdog has stepped up investigations and on-site inspections on retailers and producers. It’s already imposed record fines on some of the country’s biggest chain stores for alleged price gouging. They deny wrongdoing and are appealing in court.

Meanwhile, the Competition Agency has warned it expects to issue a new set of fines after another probe found major retailers were colluding through their suppliers to drive up prices. Next on its list? Eggs.

The watchdog said last month it was looking at whether Turkey’s association of egg producers and its 29 members abused the market data they collect to fix prices.

Surging food prices are a key driver of Turkey’s headline inflation, which approached an annual 80% in June. The cost of food and non-alcoholic beverages almost doubled last month from a year earlier.

Turkey’s egg producers say they’ve had no choice but to hike prices as a double whammy of soaring global inflation and a weakening lira makes imports more expensive.

But while egg prices have risen sharply over the past year, they fell more than 4% in June from the previous month, as pressure on producers mounted.

Turkey produced about 20 billion eggs in 2019, according to the US Department of Agriculture, but an increase in the cost of feed means output was already stagnating before Russia’s invasion of Ukraine upended grain markets. Farmers also import hatching eggs and day-old chicks; their prices have risen too.

“We have had numerous meetings with the inspectors from ministries before and those officials confirmed our price hikes were based on the changing cost of raw material,” said Ibrahim Afyon, head of Turkey Egg Producers Association. “Producers have been under stress because of verbal guidance by officials on keeping prices down in an economy where costs are rising rapidly, but we don’t believe we have done anything wrong.”

Turkey’s government has been increasing pressure on businesses since the central bank embarked in the last quarter of 2021 on a round of monetary easing that’s battered the lira, triggered outflows and fueled inflation.

“Not all the price hikes can be explained by costs, demand and the fluctuations in world commodity markets,” Birol Kule, the head of Turkey’s Competition Agency, said in an interview last week. “The lack of competition in some fields has an enhancing effect on inflation, it has a considerable weight on prices in Turkey.”