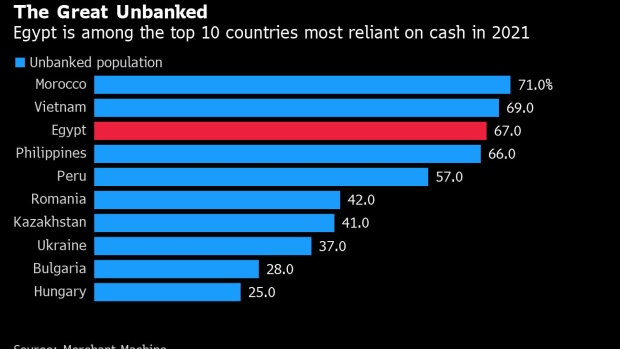 A pedestrian checks a mobile device near market stalls in Cairo, Egypt on March 31, 2018. Egyptian President Abdel-Fattah El-Sisi was set to sweep to victory with more than 90 percent of the vote in this week's election, crushing his one token challenger after credible competitors were eliminated before the contest. Photographer: Sima Diab/Bloomberg , Bloomberg

(Bloomberg) -- The co-founder of a pioneering Egyptian buy-now, pay-later firm is targeting a market of more than 40 million bankcard holders with a new startup that offers on-the-spot approvals for deferred payments.

Egypt’s financial tech and online payment market is booming, as the government of the most populous Arab country encourages more cashless transactions and e-commerce sales surge even as small retailers remain key and cash is king. State-run e-Finance is listing on Egypt’s stock exchange while Fawry for Banking & Payment Technology Services has just made its first foreign deal.

Egyptian startups saw about $194 million of investment in the first half of 2021, more than a quarter of the total for the entire Middle East and North Africa, Egypt’s Information Technology Industry Development Agency said in July.