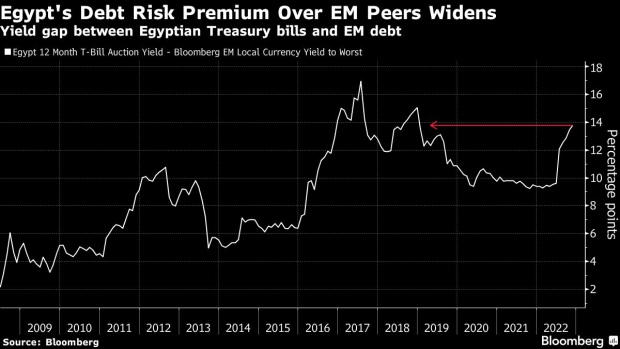 Egypt’s newly flexible currency is still too tame for a market that’s bracing for more disruption ahead.

Although Egypt has allowed the pound to slide more than almost every other currency in the world this quarter, investors are questioning whether authorities would completely loosen their grip if it comes under more pressure. They may not need to wait long for answers.

Among developing peers, Egypt is the economy most vulnerable to a currency crisis over the next 12 months, according to a Nomura Holdings Inc. gauge that’s predicted past selloffs. HSBC Holdings Plc, which previously expected the pound to stabilize around 24 per dollar, now tentatively envisions a move toward 26, which implies a depreciation of around 5.5% from current levels.

At stake is the willingness of foreign investors to plow money back into the one-time darling of emerging markets. Their reluctance so far has contributed to a steep rise in the yields on Egypt’s Treasury bills, which reached the highest since early 2019 at the latest auctions.

“Right now there is a lot of confusion as to whether we are in a truly flexible regime,” said Farouk Soussa, an economist at Goldman Sachs Group Inc. in London. “Whether the pound will be more flexible in the face of external shocks going forward and act as an automatic stabilizer to the external accounts is yet to be tested.”

The North African nation devalued the pound by 18% in late October and signaled it’s shifting to a more flexible foreign-exchange regime as the economy grapples with the fallout from Russia’s invasion of Ukraine. The currency has weakened about 20% against the dollar to record lows this quarter, the worst performer in the world after Ghana’s cedi.

But a recent bout of dollar weakness globally served to cushion the pound’s fall to around 2% this month. Emerging-market currencies have jumped almost 3% in November as the dollar retreated.

One-week historical volatility in the dollar-pound -- which measures how far traded prices move away from their average -- has fallen back to levels seen before the latest sharp devaluation.

“After an initial sharp move at the time the IMF deal was concluded, the Egyptian pound has been little changed against the dollar, at a time when other EM currencies have been more volatile,” Simon Williams, chief economist at HSBC Holdings Plc for Central & Eastern Europe, the Middle East and Africa, said in a report.

“If the status quo persists and the FX market struggles to clear, the likelihood of a deeper downward shift in the value of the pound will rise,” Williams said.

It scored the highest among emerging counterparts in Nomura’s early warning indicator of exchange-rate crises. The nation is one of four developing countries “not yet out of the woods” even after experiencing a currency selloff, according to the Tokyo-based bank.

For now, Egypt is set to allow for “some accelerated depreciation” ahead of an expected approval next month of a $3 billion loan from the International Monetary Fund, which favors a more flexible exchange rate as a condition of financial support, according to Gordon Bowers, a London-based analyst at Columbia Threadneedle Investments.

The central bank plans by end-December to remove a requirement for importers to acquire letters of credit to buy some goods abroad. The country also needs to clear a backlog of requests  -- estimated at over $5 billion -- from importers and companies to access hard currency, another move that could add pressure on the pound.

“It seems like the authorities want to manage this clearing process, and once the backlog is at manageable levels we could see more flexibility,” Bowers said. “But until then, I think it’s too soon to get a sense of how truly flexible the new exchange rate regime will be.”

Concerns about inflation and social stability may be putting constraints on policy in a country where the majority is vulnerable to price shocks. While Egypt is adding instruments for investors and corporates to hedge against foreign-exchange risks, trading in the local derivatives market is still thin.

In the offshore market, derivatives traders have stepped up bets that the pound will additionally depreciate over 13% in the next 12 months.

The pound will remain under pressure until there are more dollar inflows from Gulf allies that have rushed to Egypt’s aid with pledges of deposits and investments, according to Carla Slim, an economist at Standard Chartered Plc.