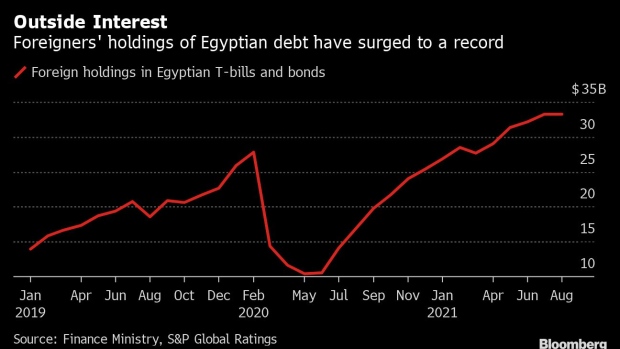 Women eat at a cafe on Talaat Harb square in Cairo, Egypt on March 31, 2018. Egyptian President Abdel-Fattah El-Sisi was set to sweep to victory with more than 90 percent of the vote in this week's election, crushing his one token challenger after credible competitors were eliminated before the contest. Photographer: Sima Diab/Bloomberg , Bloomberg

(Bloomberg) -- Egypt will likely leave interest rates unchanged on Thursday, seeking to shore up overseas appetite for its local debt as the U.S. prepares to taper pandemic stimulus and global inflation surges.

The central bank will be keen to maintain the competitiveness of high-yielding T-bills and bonds as anticipated interest-rate hikes in advanced economies could undermine their attractiveness to foreign investors.

All 11 economists surveyed by Bloomberg predict the Monetary Policy Committee will hold the benchmark deposit rate at 8.25% and lending rate at 9.25% for an eighth consecutive meeting. Authorities slashed rates a combined 400 basis points last year.

The central bank “will still keep an eye on two main factors: signs of infiltration of global inflation into the local market and the pace of expected tightening by the U.S. Federal Reserve,” said Mohamed Abu Basha, head of macroeconomic research at Cairo-based investment bank EFG Hermes.

The most populous Arab country offers one of the world’s highest inflation-adjusted interest rates. That status has made its debt a favorite for overseas investors who hold around $33 billion in local bills and bonds, an important buffer for Egypt as tourism awaits a full recovery from the pandemic.

“Maintaining high real rates is likely to remain the preferred strategy to safeguard against an outflow of foreign (mainly short-term) portfolio investment,” said Farouk Soussa, an economist at Goldman Sachs Group Inc. He cited “ongoing underlying fragility in the external accounts, particularly the country’s dependence on debt-creating inflows to fund its trade deficit.”

Authorities will have to consider the possible local impact from rocketing global inflation as economies recover from Covid-19. Consumer prices in urban parts of Egypt rose last month at their fastest pace since January 2020, to 6.6%, propelled by a spike in food costs.

The annual price gain in September was within the central bank’s target of 5% to 9%, though, and is “unlikely to drive a policy reaction from the central bank as it was predominantly driven by seasonal increase in volatile food items,” said Abu Basha.

Soussa said there was likely to be scope for further monetary easing next year, most likely in the second quarter, given high inflation-adjusted interest rates, a recovery in tourism revenue and improving finances.

Rates will only increase as a last resort in the event of a significant exit of foreign portfolio investments, said Radwa El-Swaify, head of research at Cairo-based Al Ahly Pharos.