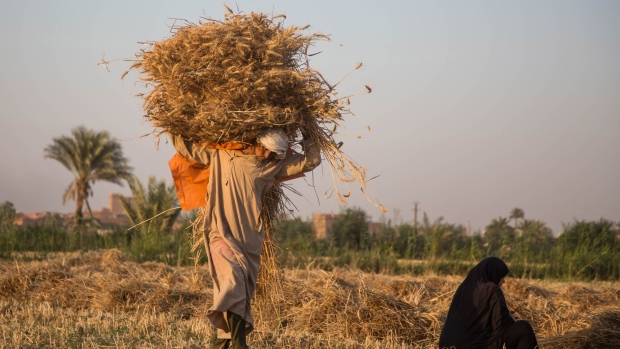 A worker carries wheat during the harvest in Fayoum, Egypt, on May 19. Photographer: Islam Safwat/Bloomberg , Bloomberg

A $3 billion increase in funding from the International Islamic Trade Finance Corp. is helping Egypt deal with soaring wheat prices caused by Russia’s invasion of Ukraine, according to an Egyptian official.

Under a pact with the Saudi Arabia-based organization, Egypt’s total funding has been doubled to $6 billion, Supply Minister Aly El-Moselhy said in an interview with the MBC TV channel on Monday. He didn’t say when the agreement, which also helps cover oil imports, was made.

It means, the IITFC “is the one that pays and covers Egypt’s wheat imports,” El-Moselhy said. “Therefore, wheat purchases from abroad do not represent any pressure on the central bank.”

The support is key to the North African nation that’s among the world’s biggest buyers of the grain and employs it as the cornerstone of a bread subsidy program used by about 70% of its roughly 100 million population. The war in Ukraine has also contributed to outflows of foreign investment from the local debt market and may curb visits by Russian tourists, previously a significant portion of foreign arrivals.

To stabilize finances, Egypt has turned to its oil-rich allies in the Gulf, securing commitments for at least $22 billion through deposits and investments from Saudi Arabia, the United Arab Emirates and Qatar. A person familiar with UAE thinking told Bloomberg in March that it was investing after Egypt expressed concerns over food security.

The Jeddah-based IITFC describes itself as an autonomous entity within the Islamic Development Bank Group.

Egypt, which previously bought significant amounts of wheat from Ukraine and Russia, has been seeking alternative sources as well as bolstering local production. The prime minister has said the country’s wheat-import bill is set to rise to $4.4 billion in the fiscal year that ends at the close of June.

The government has bought 2.7 million tons of wheat from local farmers since the beginning of the season last month and targets more than 5 million tons total, El-Moselhy said Monday. Egypt’s stockpiles are sufficient until mid-October, he said.