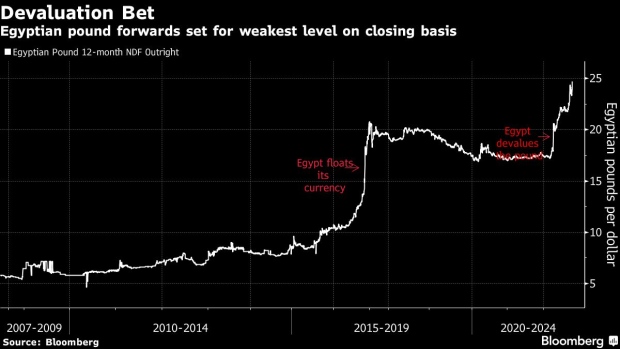 Workers bake bread for sale at the Al-Monira market in Cairo, Egypt, on Wednesday, June 1, 2022. Global food prices are soaring near the fastest pace ever as Russia’s invasion of Ukraine chokes crop supplies, with Egypt, the world’s biggest wheat buyer, now grappling with higher import bills as the conflict causes a run-up in grain and energy costs. , Bloomberg

(Bloomberg) -- Egypt kept interest rates unchanged, opting for caution a day after the central bank chief’s shock resignation fueled speculation over how the country will deal with mounting pressure on the currency.

The Monetary Policy Committee maintained the deposit rate at 11.25% and the lending rate at 12.25% for a second consecutive meeting, it said in a statement Thursday. Financier Hassan Abdalla was named acting governor of the regulator hours earlier.

Economists surveyed by Bloomberg were split equally on whether the bank would make its third hike of the year. Some changed their forecasts to a hold following Wednesday’s news, leaving six of 12 seeing increases of 50 to 200 basis points.

Tarek Amer resigned after a roughly seven-year stint as governor and was appointed an adviser to President Abdel-Fattah El-Sisi. The changeover comes as the economy reels from the spillover effects of Russia’s invasion of Ukraine. Inflation is running at a three-year high as food and fuel import bills soar while the country is struggling to lure back foreign investors who pulled some $20 billion from the local debt market this year.

Abdalla previously held senior positions over many years at the Arab African International Bank, which was jointly established with the central bank, and more recently has been chairman of the United Media Services group, which owns many of Egypt’s most popular newspapers and TV channels. He’s also the founder of Panther Associates, a financial advisory firm.

The Arab world’s most populous nation has hiked rates by a cumulative 300 basis points since March, although that’s yet to slow the consumer-price index, which reached an annual 13.6% in July. Gulf allies have offered aid of more than $22 billion through deposits and investments to shore up the economy.

The leadership change is playing out against the backdrop of mounting calls for Egypt to weaken its pound to absorb the shocks. The government has been seeking a new loan from the International Monetary Fund, which favors a more flexible exchange rate.

Authorities already devalued the currency by 15% in March, but investors and economists think it has much further to go to reflect its true value.

Traders have stepped up their bets that Egypt will allow further depreciation since the departure of Amer, who was seen as supportive of a stable pound. In the non-deliverable forwards market, the currency’s 12-month contract was on course for its weakest close ever in the hours before the meeting.

Thursday’s pause is probably temporary, with monetary tightening likely to resume under a new governor, according to analysts. They see inflation quickening for the rest of 2022 on the back of further local fuel-prices rises and more weakness in the currency.