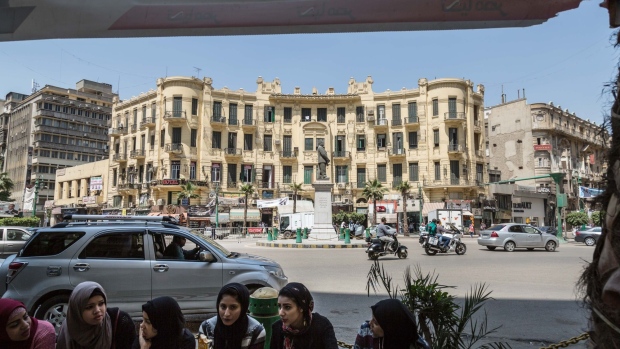 A cyclist balances a bread board on his head as he rides in Cairo, Egypt on March 31, 2018. Egyptian President Abdel-Fattah El-Sisi was set to sweep to victory with more than 90 percent of the vote in this week's election, crushing his one token challenger after credible competitors were eliminated before the contest. , Bloomberg

(Bloomberg) -- Egypt’s inflation rate slowed to its lowest level in over 9 years, offering fresh ammunition for the central bank to move ahead with new rate cuts when it meets again next week.

Consumer prices in urban parts of the country rose by 3.1% in October compared to 4.8% in September, according to the state statistics agency, CAPMAS. The rate was the lowest since September 2010, according to Bloomberg data.

The month-on-month rate accelerated to 1% compared to September. A slowdown in food and beverage prices, which account for the largest component of the consumer price index, appeared to be the driving force behind the deceleration in the annual rate.

To contact the reporter on this story: Tarek El-Tablawy in cairo at teltablawy@bloomberg.net

To contact the editors responsible for this story: Alaa Shahine at asalha@bloomberg.net, Michael Gunn