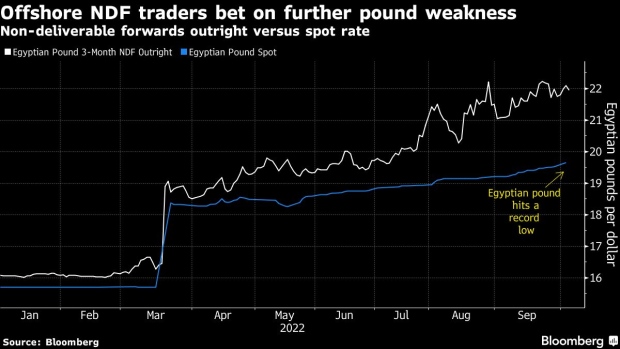 (Bloomberg) -- Egypt’s central bank is set to allow new currency derivatives to unlock liquidity in the local market, making available instruments to hedge against risks to the pound after it fell to a record.

Under the plan, domestic lenders would introduce onshore non-deliverable forwards, or NDF contracts, and options that allow companies and investors for the first time to bet on or hedge against swings in the Egyptian currency, according to people with direct knowledge of the matter.

The goal is to build a more transparent local market with the credibility to guide expectations on currency movements, said the people, who asked not to be identified because the information isn’t public.

Implementing the plan would provide local companies with a way to protect against bigger swings in the pound should Egypt adopt a looser exchange rate. Until now, Egypt’s local banks were only able to deal in foreign currency at the spot rate.

Greater currency flexibility has emerged as one of the main issues in Egypt’s talks with the International Monetary Fund as it moves closer to clinching a deal. Egyptian officials are traveling to Washington next week to participate in the IMF and World Bank annual meetings.

While the local market for forwards contracts, introduced years ago, has been inactive, Egyptian lenders such as Banque Misr have already made them available on the Bloomberg terminal for durations ranging from one week to a year. The contracts are agreements in which assets are bought and sold at predetermined prices for future delivery.

The latest initiative marks another step by Hassan Abdalla, who became acting central bank governor in August after the surprise resignation of his predecessor, long seen as a supporter of a stable pound.

Some of the world’s biggest banks have said the Egyptian pound is still too expensive and the IMF would demand a looser exchange rate -- even after the central bank devalued it by about 15% in March. The government has already conceded a more flexible currency is necessary to support an economy that’s grappling with a shortage of dollars.

The pound has been moving weaker in small increments and hit a record low in the offshore market on Tuesday.

Traders have also resumed betting for a bigger depreciation, according to NDFs traded offshore, after paring those wagers in the wake of the central bank’s unexpected decision to keep interest rates unchanged in late September.

NDFs are agreements between counterparties to buy or sell a currency at a pre-determined rate in the future but without actually exchanging the currency. At maturity, profits or losses are netted by calculating the difference between the NDF rate agreed upon and the market rate at the time.

Read: Currency Cure by Stealth Has Egypt Sweating It Out Months Later

Egypt, one of the world’s biggest importers of wheat, was among emerging economies vulnerable to the fallout from Russia’s invasion of Ukraine. A wave of inflation and market upheaval has contributed to its worst foreign-exchange crunch since a dollar shortage half a decade ago prompted a pound devaluation and eventually led to a $12 billion IMF loan.