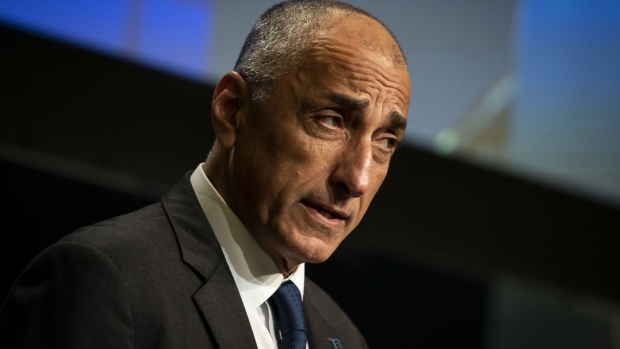 Egyptian central bank Governor Tarek Amer resigned, a shock decision one day before an interest-rate meeting and with pressure mounting on the currency.

Amer was appointed as an adviser to President Abdel-Fattah El-Sisi, the state-run Middle East News Agency reported Wednesday. No further details were given on his resignation, and it didn’t say who would be the next governor.

Derivatives traders added to bets for a weaker pound. In the non-deliverable forwards market, the three-month contract was around 21.1 per dollar Wednesday, compared with 20.4 on Tuesday. The spot rate slipped 0.1% to 19.16 against the dollar in the offshore market.

The departure adds more uncertainty for an economy that’s under pressure from the spillover effects of Russia’s invasion of Ukraine. Amer’s drama-filled tenure included a steep currency devaluation during his first four-year stint and another in March.

Under Amer, who started his new term in January 2020, Egypt became a prime destination for hot money by keeping its currency stable and boasting the world’s highest interest rates when adjusted for inflation. Soaring consumer prices in 2022 have eroded that advantage, although a slight majority of economists surveyed before the governor’s departure expect Egypt to hike rates for the third time this year at a meeting scheduled for Thursday.

With external capital markets all but closed, the government has been seeking a new loan from the International Monetary Fund, which favors a more flexible exchange rate.

“Given the long delays in the IMF program agreement, which we partially attributed to monetary and exchange-rate policy, the departure implies that the prospect for prior actions to an IMF program may finally be taken,” said Matthew Vogel, London-based portfolio manager and head of sovereign research at FIM Partners.

Sisi thanked Amer for his efforts, according to the Al-Masry Al-Youm daily. It cited the outgoing governor as saying that he resigned to “give a chance to others to continue the successful developmental path under the leadership of the president.”’

Amer’s term in office saw the central bank ratchet interest rates to a record high to stem annual inflation that at one point topped 30%. As that price growth slowed dramatically, Egypt was left with one of the world’s highest real interest rates, making its debt market a favorite for international investors. Those foundations were shaken this year, with foreign portfolio investors pulling out $20 billion as the effects of the Ukraine war hit home.

The change in governor “adds uncertainties in the short-term, though could open the door to monetary and FX policy that is in line with the IMF,” said Monica Malik, chief economist at Abu Dhabi Commercial Bank PJSC. “A more flexible and fairly-valued Egyptian pound will be essential for an external rebalancing, including reducing current-account deficit and supporting capital inflows.”

A former president of the National Bank of Egypt, the country’s largest state-owned lender, Amer started at the central bank in late October 2015 as Egypt, feeling the after-effects of years of unrest, reeled from a critical dollar shortage. Late the following year, the pound was devalued by about half and the government began cutting subsidies to help secure a $12 billion IMF loan.